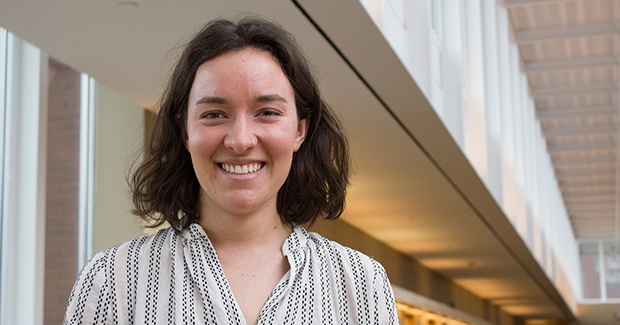 "This conference highlights the high quality of research from undergraduate students from a growing number of colleges and universities who are combining academic rigor with their passion for social justice."

Black studied the practice of jailing debtors who have not appeared in court to pay fines and fees that were attached to their original sentence. Her thesis investigates the implementation of a set of reforms designed to identify low-income debtors and remove them from the debt collection cycle by waiving their unpaid debts.

"I found that the population of debtors who are arrested is still predominantly low income and has a history of attempting and failing to pay these court debts," said Black. "Moreover, they are mistreated in various ways during the arrest and commitment, including being denied access to a phone and being misinformed about the reason for their arrest and the expected length of their stay in jail."

This year's conference at Harvard focused on issues of public health, criminal justice, social movements and community organizing and the role of identity in economics and politics. Black, who was awarded $1,000 for first prize, was among 16 finalists selected to present at the conference.

“This conference highlights the high quality of research from undergraduate students from a growing number of colleges and universities who are combining academic rigor with their passion for social justice,” said Hance. “And the work of Brown students is truly exemplary — as the conference judges’ recognition of Rachel Black’s critically incisive and politically significant thesis demonstrates."

The conference was hosted by Harvard’s Phillips Brooks House Center for Public Service and Engaged Scholarship and Harvard College Office of Diversity, Equity, and Inclusion. Students from Harvard and ten additional universities participated.