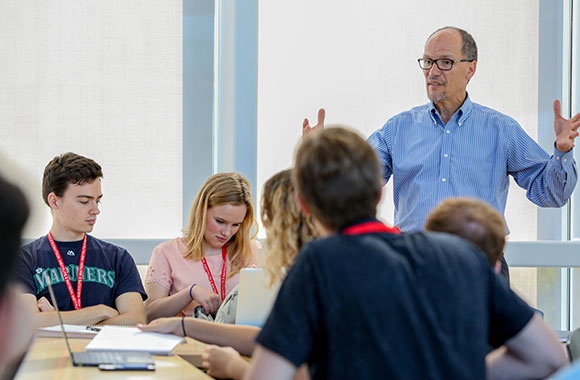 Edward-Isaac Dovere, staff writer for The Atlantic, joins Senior Fellows Tom Perez ’83, labor secretary under President Obama and current chair of the Democratic National Committee, and Michael Steele, former chair of the Republican National Committee and Lieutenant Governor of Maryland, in leading student study groups this semester. These not-for-credit, 3 to 5 week study groups provide an opportunity for students to delve deeply into topics and apply theory and research to real world challenges.

What is “the media” anyway, and what role does it play in shaping American politics? How has that changed, especially since the 2016 election? What lessons were learned, and what lessons should have been learned, by political journalists since the last presidential election? This three-part seminar will explore all those questions and more, right at the moment that the 2020 presidential election—arguably the most important in American history, and certainly the most media-saturated—takes off.

In today’s turbulent times, the journey to form a more perfect union often appears as difficult as ever. The “shortest distance theory” is seldom part of the playbook of progress in Washington, D.C. and elsewhere. A host of factors have created a political atmosphere of hyper-partisanship in which effective governance is elusive, and principled compromise is frequently derided as a four-letter word. As a result, public confidence in our political institutions, especially at the federal level, is at a low ebb.

To paraphrase Friedrich Nietzsche, madness is rare in individuals - but in parties it is the rule. From the very founding of our American political system, we have been less than sane when it comes to our politics and political parties. But what makes the madness different today? And why does it feel so personal? How do policymakers manage the growth of grassroot movements from the Tea Party to “Trumpism” while dealing with insurgencies within their own ranks?

We’ll look at both the madness and the methods of our political parties and the systems they create in the fight for domination and electoral success; and ultimately how the emergence of Donald Trump, Bernie Sanders and the myriad of political actors signal not just a profound transformation of both political parties but their eventual end.