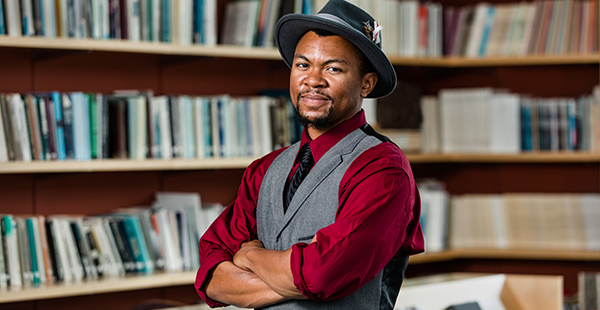 Anthony Pratcher II is a Postdoctoral Research Associate in Race and Ethnicity at Brown University. He has a joint appointment at the Center for the Study of Race and Ethnicity in America and the Watson Institute for International and Public Affairs. He earned his Ph. D. in from the History Department at the University of Pennsylvania in Summer 2017. He previously taught at Arizona State University and Estrella Mountain Community College. He teaches broadly on topics within American History and Africana Studies and has been published by Southern California Quarterly and Technology and Culture. Additionally, he co-edited a classroom reader published by Kendall-Hunt, titled, Planning Future Cities with Dr. Walter Greason. His dissertation, Community Consumed: Sunbelt Capitalism, A Praxis for Community Control, and the (Dis) Integration of Civic Life in Maryvale, Arizona, focuses on the intersection of urban policy and quotidian life to illuminate relationships between spatial formation and civic identity. His current research focuses on the bonds between race and citizenship in public policy and social practice.

My research agenda seeks to look at the intersection of public policy and quotidian culture to better understand the dialectical relationship between structural inequality and social (dis) privilege. My current research looks at the intersection of housing policy and civic life in the master-planned community of Maryvale to interrogate the impact of rapid suburban development on community formation in metropolitan Phoenix. This research uncovers how local civic leaders traded control over the built environment for the rapid economic growth of Sunbelt development to the detriment of a sustainable praxis for community formation. My future research looks at the intersection of race and citizenship in public policy discursively rationalize social practices that maintain structurally unequal access to American socio-political institutions for historically marginalized colored, indigenous, and immigrant communities. This research will provide the theoretical foundation for an intervention into the historic development of the American Southwest and a reinterpretation of transnational origins of the 20th century Sunbelt.

Book Review, “Desert Visions and the Making of Phoenix” Technology and Culture 54.3 (July 2013)