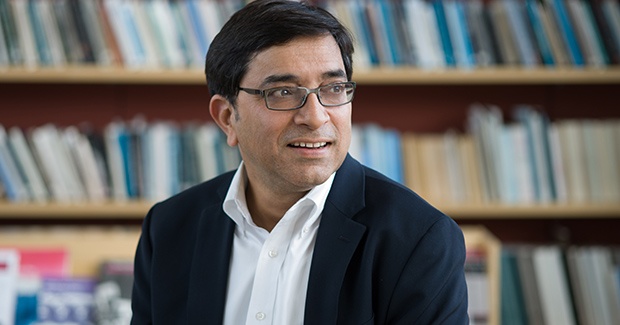 With the world’s fourth-largest concentration of billionaires, third largest middle class and single largest concentration of people living in poverty, India is an unusual democracy. So says Ashutosh Varshney, Sol Goldman Professor of International Studies and the Social Sciences, in his insightful and comprehensive article, “India’s Democracy at 70: Growth, Inequality, and Nationalism,” in the July 2017 issue of Journal of Democracy. There, Varshney wrote, “The gains for the rich and the middle class have been enormous, those for the poor meager.”

Varshney skillfully deconstructs India’s challenges and the contributions – both beneficial and destructive – of Prime Minister Narendra Modi, of the Bharativa Janata Party. His analysis of India, from the 1700s through current day – sets the economic table and depicts how and why India, in 2016, was the world’s seventh-largest economy.

Asserting that India’s democracy is becoming “Janus-faced,” Varshney applauds the nation’s electoral vibrancy – one in which poor and uneducated citizens vote as much or more than their wealthier, better educated counterparts – but bemoans the growing examples of illiberal actions between elections. Given Modi’s regime of fear and hysteria, many journalists, academics, civic organizations and business leaders avoid criticizing Modi’s policies, or censor themselves, as they fear retribution.  Some of the government critics have been killed by vigilantes.

Moreover, vigilantes and Modi’s political appointees alike promote the ideology of Hindu nationalism, a practice which is a grave threat to the Muslim community, many of whom eat beef, trade cattle and own slaughterhouses.  “A government that should be committed to the security of all its citizens is failing the nation’s largest minority,” Varshney wrote. India, the largest democracy of the world, should not mainly work for its Hindu majority and target the minorities and government critics.  It is responsible for the welfare and security of all.

Varshney’s two other current research initiatives are equally compelling and timely. With Patrick Heller, professor of sociology and international and public affairs, and colleagues in India, Varshney is engaged in analyzing the recent phenomenon of India’s rising urbanization. Until recently, India was heavily village-centric, but now about one-third of India is urban, said Varshney. “The rise of cities in primarily rural societies historically raises new political questions, such as these: ‘Will urban wishes be recognized by the polity?’ ‘Will urban citizens get adequate public services?’ ‘How is urban citizenship experienced versus village citizenship?’”

The first research paper from their project, "Does Citizenship Abate Class? Evidence and Reflections from a South Indian City" has recently appeared in Economic and Political Weekly (August 12, 2017) They plan to write a book, the first addressing citizenship and urban governance in India, once research covering15 cities and a comparison of rural and urban areas has been completed .

While Indian political research has traditionally focused on elections, Varshney and other colleagues in India are also evaluating how effectively institutions, such as the police, bureaucracy and the judiciary, operate between elections in different parts of India. “Courts are the biggest check on executive misdemeanors,” said Varshney, especially in a parliamentary democracy.

“Democracy is not only about winning elections; it’s about whether it functions according to constitutional principles,” argues Varshney, who plans to evaluate how the bureaucracy, police and courts in some 24 or so Indian states perform.

Recognizing that these research initiatives have real world implications, Varshney anticipates that non-governmental organizations and other institutions might use the research to bring about change. “This [work] will not be simply for academic conclusions,” he said.