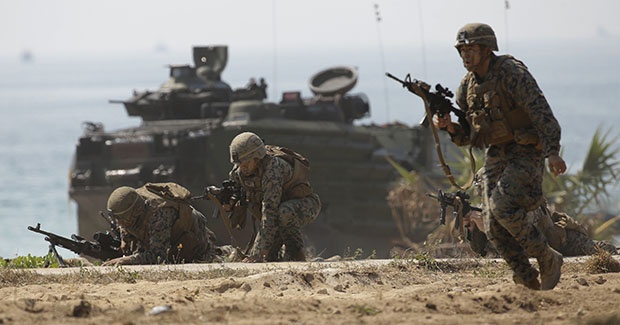 The most recent study from the Costs of War Project, United States Budgetary Costs of the Post-9/11 Wars Through FY2019: $5.9 Trillion Spent and Obligated, by Neta C. Crawford (Boston University) was published on November 14, 2018.

In a briefing room in the Senate Armed Services Committee room on November 14, the Costs of War Project released its recent estimates on how much the United States has spent fighting the war on terror. It was found that since the 9/11 terrorist attacks, the U.S. government has spent and obligated more than $5.9 trillion on wars in Iraq, Syria, Afghanistan, Pakistan, and other places around the world, according to the Costs of War Project. Written by Boston University Professor of Political Science, Neta Crawford, the report, United States Budgetary Costs of the Post-9/11 Wars Through 2019, summarizes the direct war costs—all Department of Defense Overseas Contingency Operations (OCO) funding and State Department war expenditures—war-related costs including increases in military spending, care for veterans, Department of Homeland Security spending on prevention of terrorism, and interest payments on borrowing for these wars. The estimate for total U.S. war-related spending through FY2019 is $4.9 trillion. Additionally, because the U.S. is contractually and morally obligated to pay for health care for post-9/11 veterans through their lifetimes, it is imperative to estimate costs for veterans for the next several decades at $1 trillion, bringing the total expenditures to $5.9 trillion. "The Costs of War Report includes more information than the occasionally-released summaries from the Pentagon,” stated Dr. Crawford. “This Report goes beyond the Pentagon’s numbers because war costs are more than what we spend in any one year on what’s called the ‘tip of the spear.’ There are many other cost categories behind the spear that need to be included in the overall calculation,” said Crawford.

At the briefing, Crawford discussed how the report was compiled, Steven Aftergood, a director at the Federation of American Scientists, shared the lack of government transparency around the federal budget for war, and Catherine Lutz, a Brown University professor and Co-Director of the Project, introduced the panel.

U.S. has spent $6T on wars that killed half a million people since 9/11, report says – Newsweek
2 reports on the U.S. military, 2 different messages – NPR
America has spent $5.9 trillion on wars in the Middle East and Asia since 2001, a new study says – CNBC
Two Decades After 9/11, Militants Have Only Multiplied -- The New York Times
Study: US has spent nearly $6T on war since 9/11 – The Hill
The cost of post 9/11 wars hit $5.9 trillion, 480,000 lives lost, study says – Stars and Stripes
Price tag on the 'war on terror' will top $6 trillion soon – Military Times
We owe our veterans more than a quick thank you once a year – The Hill
New Study Details 'Staggering' $6 Trillion (and Counting) Price Tag of Endless US War – Common Dreams
America's 'war on terror' has cost the US nearly $6 trillion and killed roughly half a million people, and there's no end in sight – Insider
U.S. has spent nearly $6 trillion on 'war on terror,' study says – UPI
The $6 trillion price tag for the "War on Terror" – Axios
Brown University Releases 'Cost Of War' Project – NPR
The war on terror continues and still no one counts the cost -- The Guardian
U.S. could be set for another Iraq War in Syria, despite Donald Trump complaining about 'endless wars' in Middle East – Newsweek
Senate votes to demand Donald Trump end support for Saudi Arabia in Yemen, but will it help end the war? – Newsweek