Chill Pills, Play and Panic in a California Administrative Court: State Power and the Co-Construction of Child and Adulthood 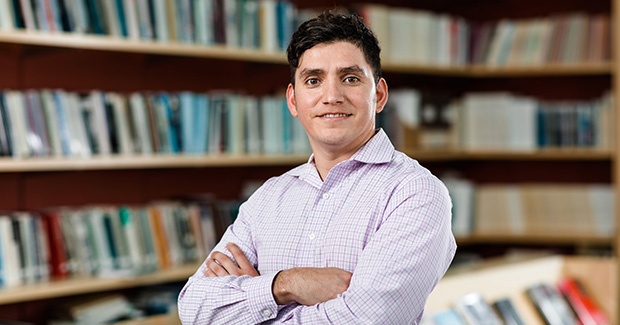 Postdoctoral Research Associate in Race and Ethnicity and Postdoctoral Fellow in International and Public Affairs Dario Valles was awarded the Graduate Student Paper Prize by the Association for Political and Legal Anthropology (APLA) this November for his article, Chill Pills, Play and Panic in a California Administrative Court: State Power and the Co-Construction of Child and Adulthood. It will now be reviewed for publication in PoLAR: The Political and Legal Anthropology Review.

This article explores how play, prescription drugs, and public policy – and with it, understandings of race, gender, and citizenship – unexpectedly coalesce within administrative courts hearings in Los Angeles.  The California Office of Administrative (OAH) hearings are quasi-judicial tribunals that adjudicate disputes among state agencies, individuals and businesses – including in the licensing of family childcare homes. The article centers on court-room hearing observations and transcriptions from a case involving Ms. Williams (pseudonym), a Los Angeleno childcare provider who risked losing her caregiving license for exposing children to candy-filled prescription containers she called “chill pills.” Valles draws from a forthcoming book project on the experiences of Mexican, Central and African American family childcare providers, who offer state-subsidized care to low-income families.

In the article, he demonstrates how the prosecution of Ms. Williams indexes the dialectical construction of childhood and adulthood that reproduces racial and gendered forms of unequal citizenship in the contemporary U.S. Valles analyzes observations and transcripts of the license revocation hearings, as well as data from twenty-seven months of ethnography with home-based childcare providers, drawing from theoretical insights from the anthropology of the state, and feminist and childhood studies frameworks. In scrutinizing the shifting legal and discursive objectifications of child’s play within the administrative judicial system, he argues that post-welfare public and private institutions assert competing visions of children as vulnerable and future risks in the hands of non-kin caregivers. Further, street level bureaucrats and administrative courts police Latinx and Black children and women caregivers’ racialized bodies, and reinterpret child’s play with discourses of dependency. The ethnographic vignettes give context to the use of and panic regarding “chill pills,” including the specter of the opioid crisis and an interplay of anti-immigrant and anti-welfare rhetoric that centers on women and youth.

Ms. Williams’ case exemplifies how the “translocal” state and the way attendant racial and gender formations are produced and contested in everyday settings and civil courts. The administrative court system affects thousands of licensed caregivers in the U.S. such as Ms. Williams, who find their hands tied by a lack of funding for early education and increasing surveillance of those who raise the next generation.