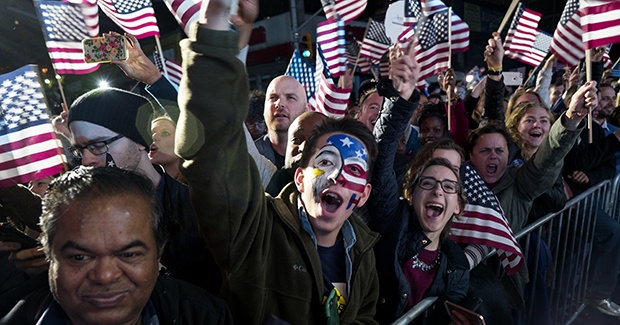 Many Americans are concerned that Washington no longer solves problems and that partisan polarization is undermining efforts to promote the public interest. But how accurate is this diagnosis and what can be done to make government more effective and responsive? To address these questions, Eric Patashnik, Julis-Rabinowitz Professor of Public Policy and Wendy Schiller, Professor and Chair of the Department of Political Science, directed an all-day conference at the Watson Institute on November 15, 2018 on “The Dynamics of American Democracy: Partisan Polarization, Political Competition and Government Performance,” sponsored by the Julis-Rabinowitz Family. The conference brought together some of the nation's leading scholars of U.S. politics and public policy together with practitioners who are working to reform the U.S. political process. The opening session featured a keynote presentation by Katherine Gehl (former CEO Gehl Foods, Inc.) and Michael Porter (Harvard Business School) on their study “Why Competition in the Politics Industry is Failing America.” Political theorist Ian Shapiro (Yale University) provided commentary

Scholars from the Brookings Institution, Brown University, George Washington University, Michigan State University, Princeton University, Stanford University, Tufts University, University of Arizona, University of Maryland, and the University of Pittsburgh presented papers exploring a diverse set of topics, including the role of identity politics in the 2016 presidential election, the rise of tribalism in American political history, the causes of legislative gridlock, public support for third parties, the behavior of liberals and conservatives on social media, whether Republicans in the House and Senate are really as unified as their voting cohesion suggests, and public views of the quality of democracy in the American states.