"In a post-Citizens United world, fossil fuel interests have used immense power to control our political system through unlimited spending in elections. It’s going to take all hands on deck to overcome the industry’s interests...” 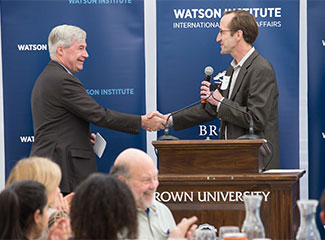 “I’m grateful to Brown University for hosting this conversation, which is so important for our economy and way of life in the Ocean State," said Senator Whitehouse. "In a post-Citizens United world, fossil fuel interests have used immense power to control our political system through unlimited spending in elections. It’s going to take all hands on deck to overcome the industry’s interests and curb the coming effects of climate change.” 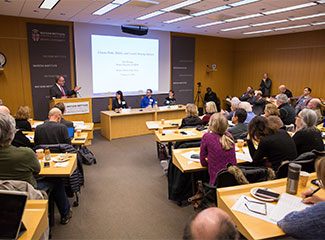 The implications and solutions to climate change are complex and themselves shifting. The event pulled together economists and sociologists to consider crucial topics that are quite inter-related: the under-valuation of services provided by a stable planetary climate system, the fragile state of financial systems built on ignoring those risks and costs—to coastal properties and financial assets, and what coalitions are blocking action in the United States. Throughout the day discussions turned to solutions, and pushing back on those denying the severity of this crisis and the viability of ambitious action. Senator Whitehouse offered keynote remarks to a packed crowd, entitled, “All this risk: Why are we unable to act?”

“Having insider perspective today from the U.S. Senate illuminates how these are not just academic debates,” said Timmons Roberts, professor in the Institute at Brown for Environment and Society, and co-organizer of the event, “and Senator Whitehouse has been on the frontline of this battle for nearly a decade.” 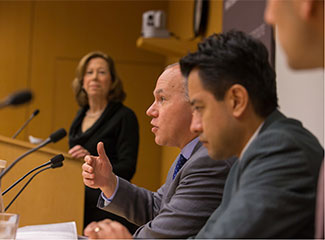 The conference focused on three key areas. First, the economics of rising sea levels for real coastal estate markets. Second, the economics of ‘stranded carbon assets.’ That is, the raw materials and financial assets tied up in fossil fuels and other greenhouse gas emitting activities that are worth a lot today, but whose values could collapse in the future as climate change demands the curtailment of such activities. The third, the organized politics of climate denial.

Co-sponsored by the Office of the President, the Watson Institute’s Rhodes Center for International Economics, the Institute at Brown for Environment and Society, and the Office of U.S. Senator Sheldon Whitehouse, the full schedule and event recordings are available online.