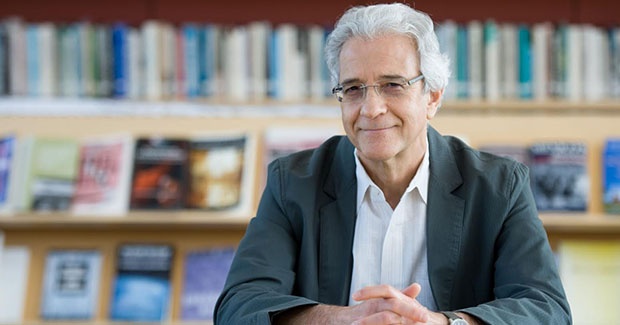 The conflict between Israel and Palestine has left a plethora of unanswered questions in its wake, often with disputed narratives and ever changing environment and geography. Subsequently, a multi-year project entitled “Israel-Palestine, Lands and Peoples,” was organized to seek a deeper understanding of the region and its peoples.

Led by Omer Bartov, the John P. Birkelund Distinguished Professor of European History and a Watson faculty fellow, this Initiative seeks to provide a deeper understanding of the links between the region that is now known as Israel and Palestine and the peoples that have inhabited it or have made it into part of their mental, mythical, and religious landscape throughout history. The Initiative is interdisciplinary at its very core, engaging the perspectives of historians and geologists, geographers and sociologists, scholars of religion and literature, art and anthropology, politics and media. At the very heart of this Initiative is the question: What makes for the bond between individuals and groups on the one hand, and a place, on the other, be it real or imagined, tangible as its stones or ephemeral as the hopes and longings it evokes.

The Initiative is dedicated to the following main themes: Histories: The different, varied, and often disputed narratives told and histories written about the lands of Israel-‐Palestine from their early appearance in the historical record to the present. Lands: The changing and complex geology, geography, and environment of these lands both over the longue durée of geological time and more recent environmental changes and challenges. Mindscapes: The extraordinary range of artistic, literary, mythical and religious engagements with these lands and their representation over three millennia as the concrete birthplace of universal faiths and values. Presents: The present political, socioeconomic, ethnographic, religious and cultural conditions in Israel-‐Palestine with all their human complexity and diversity and the different prisms through which they are seen and interpreted – the togetherness and apartness of human existence there. Futures: The starkly different imaginings, drafting, planning and building of competing, exclusive, and complementary futures of these land – lands where hoped for utopias and warnings of apocalypse are as old as their first inhabitants.

Each year the Initiative will host two workshops, in the fall and the spring, each comprising 10-15 scholars and open to invited members of the Brown community who will read papers in advance. Workshops will consist of comprehensive discussions of pre-circulated papers on a theme relevant to the Initiative.

For further details on the project, please contact Omer Bartov.  To learn more about the workshops, visit the workshop webpages:

3rd Workshop: November 10-12, 2016 – The Holocaust and the Nakba:  A New Grammar of Conflicting Historical Traumas