Pentagon Fuel Use, Climate Change, and the Costs of War 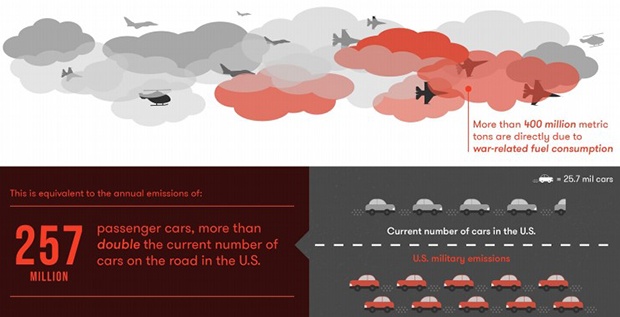 The Costs of War Project’s newest report, Pentagon Fuel Use, Climate Change, and the Costs of War, written by Neta C. Crawford, was published on June 12, 2019.

The United States’ military comprises of more than two million people, 11 nuclear aircraft carriers, a $700 billion budget in 2019, and the most advanced military aircraft in the world. According to Neta C. Crawford, co-director of the Costs of War Project, “all this capacity for and use of military force requires a great deal of energy, most of it in the form of fossil fuel.” As a result, the U.S. Department of Defense is the world’s largest institutional user of petroleum, and therefore the single largest producer of greenhouse gases in the world.

In Pentagon Fuel Use, Climate Change, and the Costs of War, Crawford examines military fuel usage for post-9/11 wars and the impact of that fuel usage on greenhouse gases emissions. She found that between 2001 and 2017, the years for which data is available since the beginning of the war on terrorism with the U.S. invasion of Afghanistan, the U.S. military emitted 1.2 billion metric tons of greenhouse gases. More than 400 million metric tons of greenhouse gases are directly due to war-related fuel consumption, with the largest portion of Pentagon fuel consumption being for military jets. As General David Petraeus said in 2011, “Energy is the lifeblood of our warfighting capabilities.”

The New Anti-War Movement - The Nation

The U.S. military's greenhouse gas emissions are higher than most countries – Mic

There Is No Such Thing as a Green War – Truth Out