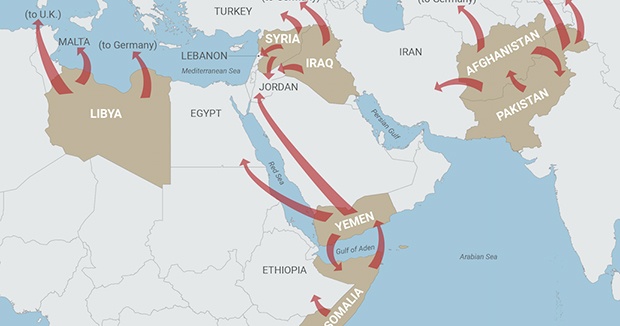 In September 2020, the Costs of War project released a new report entitled, "Creating Refugees: Displacement Caused by the U.S. Post-9/11 Wars," outlining the number of people displaced as a result of post-9/11 wars.

The United States' post-9/11 wars have displaced at least 37 million people, according to a new report released today by Costs of War. This study, "Creating Refugees: Displacement Caused by the U.S. Post-9/11 Wars," is the first to calculate the displacement toll of these wars. The estimate was derived by counting refugees, asylum seekers pursuing protection as refugees, and internally displaced people or persons (IDPs) in the eight countries that the United States has most targeted in the post 9/11 wars: Afghanistan, Iraq, Pakistan, Yemen, Somalia, the Phillipines, Libya, and Syria.