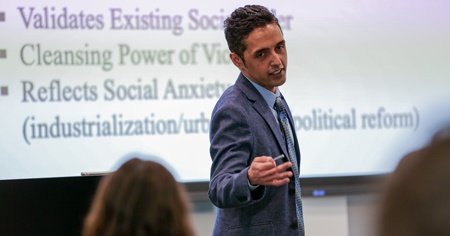 In April 2020, Anand Toprani, who co-teaches The Political Economy of Strategy: From the Financial Revolution to the Revolution in Military Affairs, received the OAH's prestigious Richard W. Leopold Prize which is awarded every two years for the best book on military affairs, foreign policy, documentary histories, historical activities of the federal government, or biography written by a U.S. government historian or federal contract historian.

Toprani received the award for his book titled, "Oil and the Great Powers" which published in June 2019. His work  explores the response of political decision makers in Britain and Germany to that new landscape, analyzing each in the context of its own geographic, geological, economic, and political circumstance. The book offers historians an important angle of vision on Europe’s twentieth-century decline while providing policy makers thoughtful considerations on the goal of energy security. Toprani co-teaches INTL 1555 with Michael Dennis at the Watson Institute, and both are professors of strategy and policy at the Naval War College in Newport.