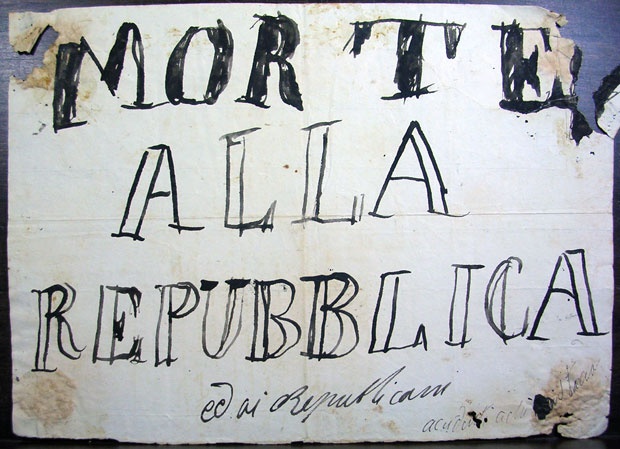 “Death to the Republic” sign put on the walls of Rome, June 1949 (from Archivio di Stato, Rome).

As revolutions swept Europe in 1848, popular revolts throughout the Papal States threatened the pope’s temporal power. Following the assassination of his prime minister in the fall of 1848, Pope Pius IX fled Rome and took refuge in the Kingdom of Naples. Giuseppe Mazzini and colleagues proclaimed the end of papal power and prepared a modern constitution for the newly announced Roman Republic. Giuseppe Garibaldi joined them to organize its defense. From his fortress at Gaeta, Pius IX called on the Catholic powers of Europe to send their armies to restore him to power. Ironically, the pope found his champion in Louis Napoleon, not known previously for his sympathy for the papacy’s temporal power. Under the pretext of helping out a fellow republic and keeping the Austrian armies at bay, the French army landed outside Rome. It was not long before their cannons began trying to blast through Rome’s medieval walls. Utilizing the vast range of archival and published primary sources available for this dramatic period, this study casts new light on a formative part of modern European history.

Related Books by David I. Kertzer