The COVID Crisis in Eastern Europe 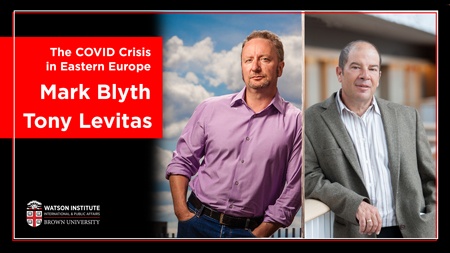 Join Professors Tony Levitas and Mark Blyth for a virtual live event to discuss the recent COVID-19 crisis and how it has particularly affected Eastern Europe.

For the last twenty years, Tony Levitas, Director, Undergraduate Public Policy Concentration, has been providing analytical and political advice on local government reform to elected officials and civil servants in post-communist Europe. In general, he helps policy makers decide what responsibilities sub-national governments should have and where they should get the money to pay for them.

Mark Blyth, Director of the William R. Rhodes Center for International Economics and Finance, is a political economist whose research focuses upon how uncertainty and randomness impact complex systems, particularly economic systems, and why people continue to believe inaccurate economic ideas despite buckets of evidence to the contrary. He is the author of several books, including Great Transformations: Economic Ideas and Institutional Change in the Twentieth Century (Cambridge: Cambridge University Press 2002, Austerity: The History of a Dangerous Idea (Oxford University Press 2013, and The Future of the Euro (with Matthias Matthijs) (Oxford University Press 2015).