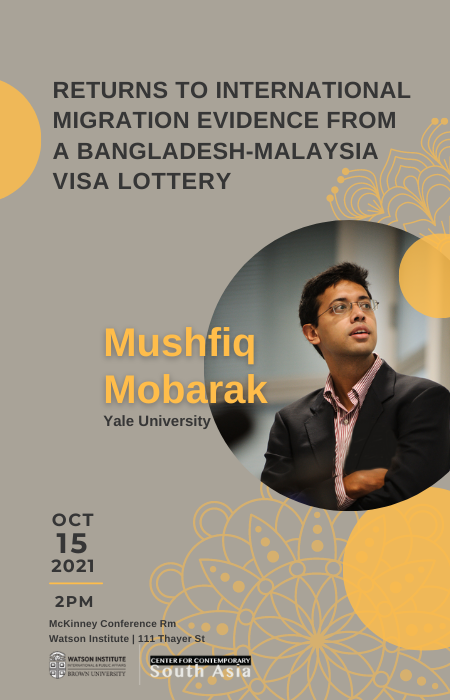 Mushfiq Mobarak is a Professor of Economics at Yale University with concurrent appointments in the School of Management and in the Department of Economics.

Mobarak is the founder and faculty director of the Yale Research Initiative on Innovation and Scale (Y-RISE). He holds other appointments at Innovations for Poverty Action, the Jameel Poverty Action Lab (J-PAL) at MIT, the International Growth Centre (IGC) at LSE.

Mobarak has several ongoing research projects in Bangladesh, Brazil, Chile, Kenya, Malawi and Sierra Leone. He conducts field experiments exploring ways to induce people in developing countries to adopt technologies or behaviors that are likely to be welfare improving. He also examines the complexities of scaling up development interventions that are proven effective in such trials. For example, he is scaling and testing strategies to address seasonal poverty using migration subsidies or consumption loans in Bangladesh, Nepal and Indonesia. His research has been published in journals across disciplines, including Econometrica, Science, The Review of Economic Studies, the American Political Science Review, Proceedings of the National Academy of Sciences, and Demography, and covered by the New York Times, The Economist, Science, NPR, BBC, Wall Street Journal, the Times of London, and other media outlets around the world. He received a Carnegie Fellowship in 2017.

Mobarak is collaborating with the government of Bangladesh, NGOs and think-tanks such as BRAC and BIGD, the major Bangladeshi telecom providers, Innovations for Poverty Action, UNDP, other economists, epidemiologists, computer scientists, and public health researchers to devise evidence-based COVID response strategies for Bangladesh and for other developing countries. The approach and results have been covered by BBC, Foreign Policy, New York Times, Washington Post, Vox, and media in India, Pakistan, Bangladesh, Nigeria, Austria, Sweden, Denmark, among others.  The work is supported by the Bill and Melinda Gates Foundation, Givewell.org, the Global Innovation Fund, and Yale Macmillan Center.