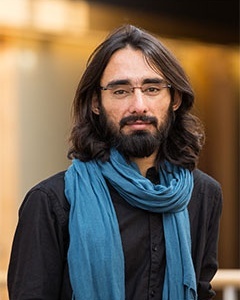 Suvaid is interested in the intellectual histories of Islamic movements in South Asia since the late nineteenth century until the present. His particular interest lies in studying how Muslim intellectuals, political leaders, and Ulema responded to the institutions of British colonial rule, and the various pathways that emerged as a response — an earlier emphasis on disengagement would eventually lead to an active engagement with the ideas and institutions of the modern State. Suvaid is also interested in exploring the parallels and divergences betweem the Islamic movements in South Asia and the Middle East.

He is currently a 2021 Mellon/ACLS dissertation completion fellow for his project Islamic Intersections: Religion and Politics in Kashmir in the Long Twentieth Century. His project examines Muslim reform movements, colonial modernity, and literary cultures in Kashmir in the long twentieth century. Based upon vernacular, subaltern records across colonial and postcolonial periods, it challenges the conventional dichotomies between “reformist orthodoxy” and “popular Sufism” in the historiography on Islam in the Indian subcontinent as well as the theoretical binaries between “religious” and “secular.” Studying Islamic revivalist movements like the Ahl-i Hadith and the Jamaat-e Islami in Kashmir on their own terms, the project charts “intellectual histories from below” and makes a case for recuperating wide-ranging forms of political imagination and modalities of religious thought, as well as transregional movement and local politics.