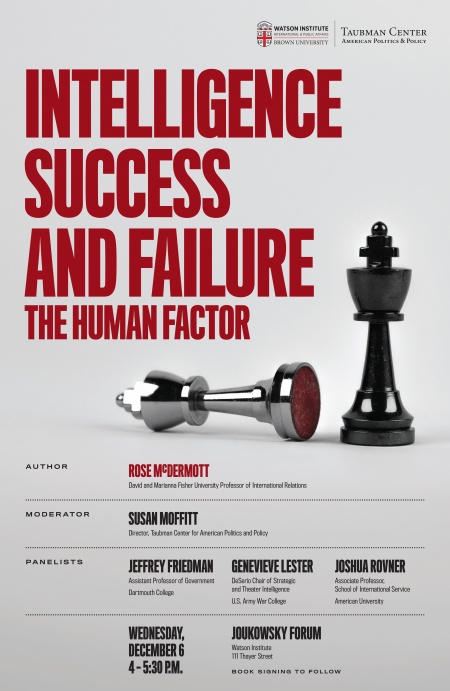 Join author Rose McDermott for a discussion of her new book Intelligence Success and Failure: The Human Factor.

Intelligence Success and Failure: The Human Factor examines the factors contributing to failure and success in responding to strategic surprise, and as such it differs from previous studies that looked only at cases of failure. Given that surprise attacks that started wars have almost always succeeded, we analyze the psychological mechanisms by which leaders learn from their mistakes, especially in the way available intelligence is used. In order to undertake this analysis in a systematic way, it investigates three pairs of major military attacks: “Barbarossa,” the June 1941 German invasion of the USSR (failure), and the battle for Moscow between October 1941 and January 1942 (success); the June 1950 North Korean invasion of South Korea (failure), and the Chinese intervention in the war five months later (failure); and the Arab attack on Israel on Yom Kippur 1973 (failure), and the second Egyptian offensive in the war six days later (success). It challenges the central thesis in the field, which asserts that the fiascos are the product of structural obstacles to proper information processing. Instead, it delineates the critical role of individual psychopathologies, particularly narcissism, paranoia, and lack of openness to new information, in precipitating failure in order to show that the key explanation for some of the most significant cases of warning failure is not unintentional action but motivated biases in key intelligence and military officers or policymakers that null the more alarmistic views of others around them. In addition, it identifies the learning process that central decision-makers engage as key to subsequent success.

The discussion will be moderated by Susan Moffitt, Director of the Taubman Center for American Politics and Policy.