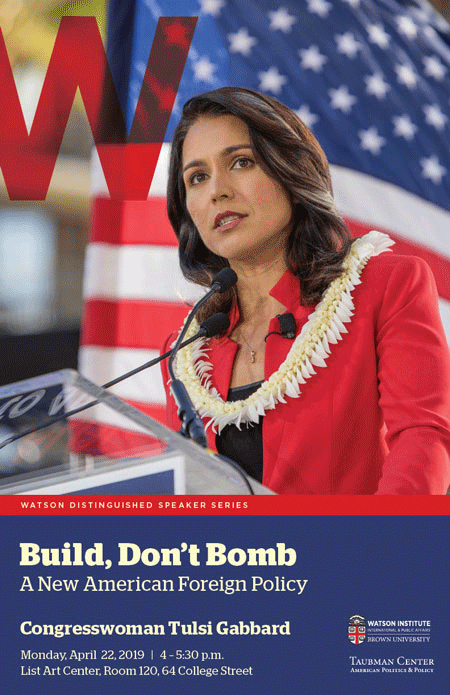 As a veteran, Congresswoman Gabbard’s experience has profoundly shaped her as a person and her approach to American foreign policy. She will discuss the need for a military that is ready and capable of protecting our nation’s security, but should not be supporting counterproductive, interventionist wars that cost countless lives and trillions of American taxpayer dollars. Congresswoman Gabbard will discuss how these savings can be used to reinvest in our country’s future.

Congresswoman Gabbard will be joined by Watson Senior Fellow Stephen Kinzer for further discussion. A Q&A session will follow.

Tulsi Gabbard was elected to the Hawaii State Legislature in 2002 when she was just 21 years old, becoming the youngest person ever elected in the state. A year later, she joined the Hawai‘i Army National Guard.

Tulsi served two tours of duty in the Middle East, and she continues her service as a Major in the Army National Guard. Tulsi’s 2005 deployment was a 12-month tour at Logistical Support Area Anaconda in Iraq, where she served in a field medical unit as a specialist with a 29th Support Battalion medical company. She was awarded the Meritorious Service Medal at the end of this tour.

In between her two tours, Tulsi served in the U.S. Senate as a legislative aide to Senator Daniel Akaka (D-HI), and graduated from the Accelerated Officer Candidate School at the Alabama Military Academy, where she was the first woman to finish as the distinguished honor graduate in the Academy's 50-year history. Tulsi was commissioned as a Second Lieutenant and continued to work for Senator Akaka until 2009, when she again voluntarily deployed with her unit to the Middle East.

In 2010, Tulsi was elected to the Honolulu City Council. Tulsi was elected in 2012 to the United States House of Representatives, serving Hawaii’s 2nd District. She is one of the first two female combat veterans to ever serve in the U.S. Congress, and also its first Hindu member.

Kinzer spent more than 20 years working for the New York Times, most of it as a foreign correspondent. His foreign postings placed him at the center of historic events and, at times, in the line of fire.

After leaving the Times in 2005, Kinzer taught journalism, political science, and international relations at Northwestern University and Boston University. He is now a Senior Fellow at the Watson Institute for International and Public Affairs at Brown University, and writes a world affairs column for The Boston Globe.