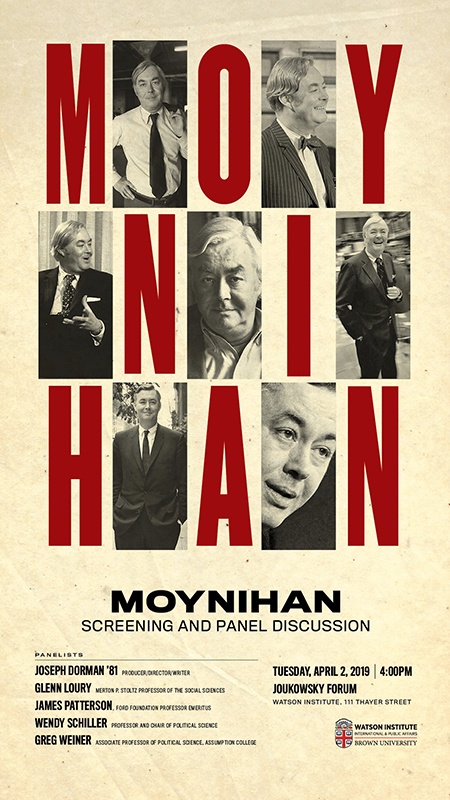 Daniel Patrick Moynihan (1927-2003) did not just live in the twentieth century, he strode across it: a colossus of ideas and a man of deeds. He was a seminal public intellectual and sociologist, policy specialist, ambassador and long serving senator. Moynihan was a moralist in a political world where morality – the urge to do good – is often overcome by the desire to do well. He had, as one friend, recalled, a “ mystical belief in public service.” In an age of rigid ideologies and political sloganeering, he was a man who embraced the contradictions and complexity of public policy without ever despairing of the role of government in the lives of its citizens. A decade after his death The Moynihan Documentary Project, the first feature length documentary about his life, captures Moynihan, the man, the thinker and the doer as never before.

More than simply a traditional great man biography, the film portrays the spirit of Moynihan’s ideas as they evolved over the course of his remarkable and often tumultuous life in postwar America, both the triumphs and the controversies. Moynihan was a public intellectual, a man who understood ideas as they existed in and influenced the world. His own work was shaped as much by his own life as by his research. His ground-breaking Beyond the Melting Pot, written with Nathan Glazer, on ethnicity in America was informed by his Irish American childhood in New York City. And one of his greatest insights into poverty and the single African-American mother was initially decried as racist and yet Moynihan’s understanding of the problem drew on the deep experience of his own childhood as the son of a single mother abandoned by her husband.

Co-sponsored by the Taubman Center for American Politics and Policy

Joseph Dorman is an award-winning independent filmmaker, founder of Riverside Films, and an adjunct instructor at New York University. He wrote and directed the critically acclaimed, theatrically released documentary, Arguing the World about the controversial sixty-year political journey of the eminent political writers and thinkers, Daniel Bell, Irving Howe, Irving Kristol and Nathan Glazer. The New York Times described it as “enthralling…  one of the deepest portraits of… of ideas ever filmed,” and The New Yorker raved “Superb.”  It was named one of the best films of 1998 by The New York Times, and New York Magazine.

His other films include Colliding Dreams (2016) and Sholem Aleichem: Laughing in the Darkness (2011). Dorman co-wrote the script of the documentary blockbuster, The Endurance: Shackleton’s Legendary Antarctic Journey, and theatrically released the documentary, Going Upriver: The Long War of John Kerry.

He was a senior producer for the prime time PBS newsmagazine series on the news media, Media Matters hosted by Pulitzer Prize-winning journalist Alex Jones, has produced numerous films on the developing world for PBS, Discovery and the United Nations including a profile of Jordan’s Crown Prince Hassan, and was a producer for the PBS series The Eleventh Hour. Dorman also writes for The New York Times Book Review and other publications.

Glenn Loury is Professor of Economics and the Merton P. Stoltz Professor of the Social Sciences. Loury has published mainly in the areas of applied microeconomic theory, game theory, industrial organization, natural resource economics, and the economics of race and inequality. He is a fellow of the American Academy of Arts and Sciences and of the Econometric Society and a member of the American Philosophical Society. In 2005 he received the John von Neumann Award, given annually by the Rajk László College of the Budapest University of Economic Science and Public Administration to "an outstanding economist whose research has exerted a major influence on students of the College over an extended period of time." He is the recipient of a Guggenheim Fellowship and a Carnegie Scholarship to support his work. He has given the prestigious Tanner Lectures on Human Values at Stanford (2007), the James A. Moffett '29 Lectures in Ethics at Princeton (2003), and the DuBois Lectures in African American Studies at Harvard (2000).

James Patterson is Ford Foundation Professor Emeritus and professor emeritus of history at Brown University. His research focuses on legal, social, and political history, as well as the history of education, medicine, and race relationships. Patterson is regarded as one of the top scholars on Brown vs. the Board of Education. Patterson's books include Congressional Conservatism and the New Deal, The New Deal and the States: Federalism in Transition, Mr. Republican: A Biography of Robert A. Taft, Brown v. Board of Education: A Civil Rights Milestone and its Troubled Legacy, The Eve of Destruction: How 1965 Transformed America and Freedom Is Not Enough: The Moynihan Report and America's Struggle over Black Family Life From LBJ to Obama.

Patterson was elected a member of the Society of American Historians in 1974, and of the American Academy of Arts and Sciences in 1997. He is the recipient of the Organization of American Historians' Frederick Jackson Turner Book Prize in 1966, and the Indiana University Teaching Award in 1968. Patterson was also awarded a Guggenheim Fellowship, and two National Endowment of the Humanities Fellowships. A number of his books have been History Book Club Selections, and in 1997, he won the Bancroft Prize for American History with his book Grand Expectations: The United States, 1945-1974.

Greg Weiner’s research and teaching converge at the intersection of political theory and the Constitution. An associate professor of political science at Assumption College, he is the author of American Burke: The Uncommon Liberalism of Daniel Patrick Moynihan and Madison’s Metronome: The Constitution, Majority Rule and the Tempo of American Politics, both published by the prestigious American Political Thought Series of the University Press of Kansas.

Weiner's research and teaching interests include the political theory of the Constitution, the political thought of James Madison, civil liberties and the role of the Supreme Court.

Weiner's research and teaching are informed by the several years he spent as a high-level aide and consultant in national politics, including serving as Communications and Policy Director to U.S. Senator Bob Kerrey, D-Nebraska, and as founder of the Washington, D.C.-based speechwriting firm Content Communications, LLC.