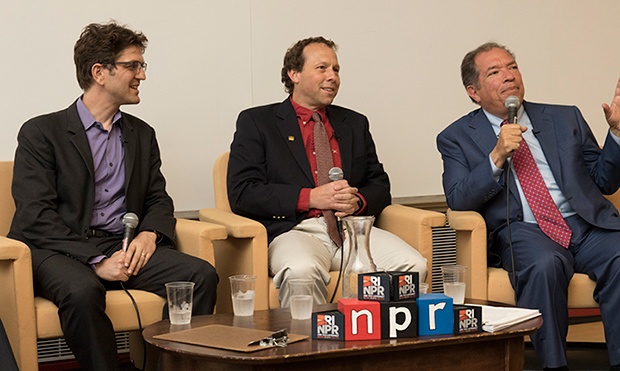 “A Providence Stadium: Strike-out or Home Run,” a public forum to discuss the pros and cons of building a 10,000-seat minor league ballpark in Providence, drew a filled-to-capacity crowd to Friedman Auditorium on June 9. The forum, jointly sponsored by the Taubman Center and Rhode Island Public Radio, featured a panel discussing the Pawtucket Red Sox’s proposed relocation from their current home in Pawtucket to a new riverfront stadium to be built in Providence’s Jewelry District. Political reporter Ian Donnis moderated the discussion. The proposal, which would involve prime riverfront real estate and hinges on substantial state support – an initial proposal asked for $150 million over 30 years – has been highly controversial.

Charles Steinberg, executive vice president of the Boston Red Sox and a senior adviser to PawSox managing partner, Larry Lucchino, opened the discussion by declaring a “fresh start” in the public discussion, to be focused on the “merits of what would be good for Rhode Island” and “what would bring public benefits and private benefits.”

Steinberg avoided specifics about the controversial financing proposal, instead offering a sales pitch that the development that would be “more than a ballpark,” that would annually host 30 events such as football games, concerts, and scholastic athletic games beyond 70 ballgames.

Jack Robbins, architect/urban planner and principal at New York City architecture firm FXFowle, said the proposed location would be ideal “from a baseball point of view,” but expressed concern that public officials must be rigorous in their evaluation of any proposal. “The key is creating a mixed-use environment,” he said. “It’s hard to do.”

Panelist Victor Matheson, professor of economics at The College of the Holy Cross in Worcester, Massachusetts and an expert on public financing of sports stadiums, cautioned that a careful study of public benefits should be done before committing public dollars to subsidize the project.

“If you are going to be putting public money in, it should not be something that’s generating activity just for private owners,” he said. Unsuccessful stadium development projects create “a walled fortress surrounded by a moat of parking lots.” Matheson expressed skepticism about whether the stadium would truly be a mixed-use venue that would generate significant economic benefits for surrounding businesses,

In the question-and-answer session following the event, the audience, many of them residents of Providence, made clear their desire for more specifics regarding the public costs and details of the proposal. Matheson, who had the final word, again urged caution in dedicating public money to the project. When it comes to America’s favorite national pastime, he said, “we often lose our heads.” — Joseph Codega, MPA ’16