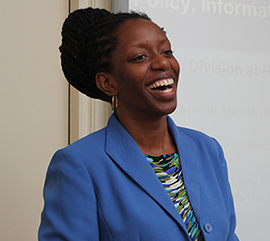 Nicole Alexander-Scott, Director of the Rhode Island Department of Health, recently spoke about the agenda and direction of the department at a public talk hosted by the Taubman Center. Alexander-Scott was appointed Director by Governor Gina Raimondo early in 2015, and has since launched a multi-faceted initiative to eliminate health inequality across Rhode Island.

The initiative is based on a holistic idea of health services. Alexander-Scott hopes to maintain high standards of health in all areas of life — not just for hospitals, but in a holistic sense for all Rhode Islanders.

“When you breathe clean air, when you walk through safe environments, when you drink clean water, when you eat food from restaurants that we work with and regulate — that’s all a demonstration of public health and what we can do together,” said Alexander-Scott.

And she wants everyone, regardless of income, race, gender, sexual orientation, or zip code, to enjoy the same high level of health services from the State of Rhode Island. In both her talk and an interview with a Taubman journalist, Dr. Alexander-Scott discussed diversity, patient-driven initiatives, and a forging a path in public health.

“As a health policy maker, decisions we have to make are not only about having a clear understanding of the public health goals. It’s also taking into account my own experiences — what it’s like to grow up in Brooklyn, New York. What it’s like to be the child of an immigrant from Trinidad. What it’s like to go to an all-girls Catholic high school, to go to Cornell and to be the sole person of color in almost every educational and work environment I’ve ever been in. And to overcome the disparities in my profession. All of those components come together to form the experience that backs up the health policy role that I’m serving in. Diversity brings strength.

“There’s a lot of relationship-building both at the individual level and at the systems level [needed to eliminate health disparities]. Recently I met with the child psychiatrists in the state who are committed to the behavioral health of children. It was myself and my colleagues across other agencies figuring out together how to make experiences better for the child and the family.

"My whole career I’ve been told, 'You’re too broad! You need to focus, you’re all over the place.' I always responded that I didn’t want to focus. I don’t want to just look at HIV alone and not look at pneumococcus or enterovirus. I always had that struggle, but now in this role, I get to do everything.”

"There’s the health policy broad-level impact that comes with this role, but I love the patient interaction too — the front lines where you hear the stories about what’s going on, and how to address it. That drives what you need  to improve the system. Statute requires that as the Director of the Department of Health, you cannot work clinically at a healthcare facility that you regulate. I miss my patients. [But] I’m staying engaged with patients, with the community, and with healthcare providers on the front lines."

"The Rhode Island Department of Health was just accredited, which is huge. There are only nine accredited state departments of health across the country, and we’re one of three that were just added. It was a three- to four-year process.

"We’re probably one of the first states to put together a statewide health inventory that captures what our healthcare landscape looks like. We did 12 massive surveys across the healthcare domain. That’s assessing hospitals, primary care providers, specialties, specialty clinics, behavioral health clinics — all across the board. We’re able to map them across the state, and we can use data to drive action. This is the first report that’s come out in almost a decade in Rhode Island."

On the agenda right now

"I’m co-chair of the Governor’s task force charged with addressing the fact that [Rhode Island has] had 1,000 overdose deaths in five years. We just published our state plan on addiction and overdose. We’ve put together a strong strategic plan with four areas of focus — treatment, prevention, recovery, and reversal. We’re building an implementation plan, and working across agencies. These deaths are preventable — we can’t keep losing lives.

We’ve also reinvigorated the children’s cabinet. We just adopted a strategic plan to help all state agencies work together to address mental health and behavioral health for our children.

"Keep following what you’re passionate about. If it’s really resonating with you or pulling your heartstrings and you’re going for hours without going to the bathroom without even realizing it — pay attention and follow that. Momentum will build. You don’t have to focus on where you want to be, just focus on what’s right in front of you."

Nicole Alexander-Scott, MD, MPH, received her Master of Public Health degree from Brown in 2011 and holds and is an assistant professorship of pediatrics and medicine at Brown's Warren Alpert Medical School.

—Condensed and edited by Eli Motycka