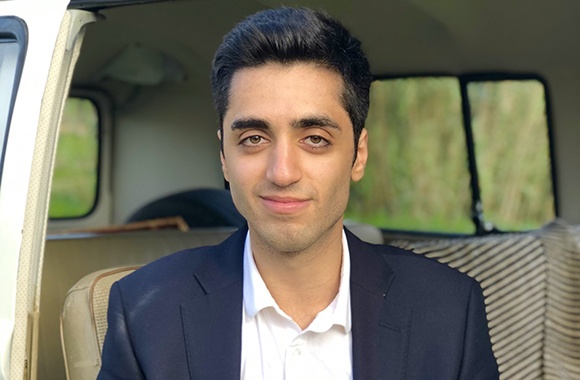 "As I wrote about questions like the moral significance of income inequality, the dignity of work, or the economic coherence of a basic income, it struck me how little I actually understood about America, its people, their motivations, and ultimately American politics."

You just returned from a leave of absence to do research and intern in Washington, DC. Why did you decide to take a year off? What did you learn?

The decision to take a year off came about for three reasons. First, I received an internship offer to work for President Barack Obama and Former First Lady Michelle Obama in their personal office. Throughout my three and half months there, I wrote letters on behalf of President Obama, assisted in the preparation of his press appearances, and supported his speechwriting team. Second, as I approached senior year, I realized I wanted to invest more time working on my thesis, familiarizing myself with relevant literature and speaking with thought leaders on the topic. By taking a year off, I had the opportunity to conduct interviews for my thesis and intern at The Brookings Institution, where I supported the work of scholars who were already on the frontiers of research relevant to my thesis. And lastly, I realized that my degree in philosophy, politics, and economics would be more well rounded if I took some time to work on political and economic issues away from academia. As I wrote about questions like the moral significance of income inequality, the dignity of work, or the economic coherence of a basic income, it struck me how little I actually understood about America, its people, their motivations, and ultimately American politics. This past academic year has given me the opportunity to dig deeper.

Political economy professor Mark Blyth supervises your thesis. What is it about, and how did you decide on your topic?

My thesis is about artificial intelligence and its effects, through a greater capacity to automate jobs, on income inequality. My interest in pursuing a thesis on this topic emerged as the significance of eminent technology in changing the economic constitution and character of the United States became clear. My thesis asks, for instance, what is the history of fears about eminent technology, and how do today’s concerns differ? Moreover, what has happened to income inequality in America in recent years, and how is automation contributing to disturbing trends in wealth allocation? With some studies predicting over 50 percent of existing jobs could be partially or entirely automated in next two decades, what is the significance of work to the human experience? And finally, how can policymakers and citizens play their part, during increasingly illiberal times, to combat income inequality caused by automation and promote more inclusive economic growth?

How has your time at Brown shaped your approach to research?

At Brown, I’ve learned the value of interdisciplinary approaches to scholarship. By pursuing an independent concentration in philosophy, politics, and economics, I have had the opportunity to consider questions in the social sciences through three distinct and powerful lenses. I’ve also realized that interdisciplinary approaches to academics often produce sums greater than each of their individual parts. So as I developed my research plans, I used these lessons from Brown to develop a thesis that considers artificial intelligence and income inequality not only as an economic question, but also as a pressing moral, political, and historical one that asks us very challenging questions about what kind of country we want to live in.

What are your plans post-graduation?

I plan to write and continue to pursue my thesis’s question about artificial intelligence and income inequality. Whether this takes me into journalism, a think tank, or politics itself, I want to use the years immediately following graduation to develop my writing and push the needle forward to ensure America’s embrace of imminent technology is an inclusive one.