Khalid Medani ─ Our Revolution is Peaceful: Understanding the Domestic and Regional Factors Behind Sudan’s Political Crisis and the Prospects for a Transition to Civilian Democracy 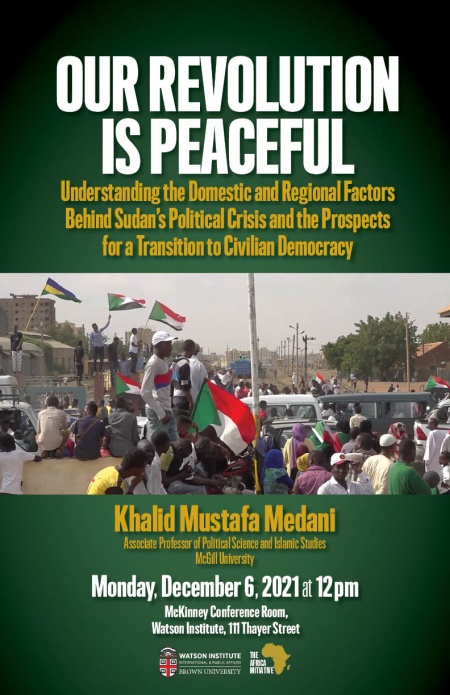 On October 25, 2021, Sudan witnessed a military coup that has threatened to reverse the country’s path towards a transition to democracy which first began in the aftermath of Sudan’s revolution of December 2018. In that year, following three decades of authoritarian rule, peaceful popular protests in Sudan successfully toppled former President Omar Bashir from power. The intifada (popular uprising) was a culmination of over six months of sustained protests that included Sudanese across the social, ethnic, and regional divide. This lecture will examine the underlying causes and consequences of the popular uprising of 2018 and 2019, the key factors that led up to the recent military coup, and the prospects for the resumption of a transition to a civilian democracy in the context of the ongoing wide-scale pro-democracy protests and non-violent forms of civil disobedience throughout the country. In addressing the obstacles as well as the prospects of a return to civilian rule, the lecture will address the important overarching question of whether Sudan will witness a return to a consolidated authoritarian regime or re-embark on a democratic transition by focusing on the levels (and nature) of popular mobilization, civil society cohesion, political party autonomy and legitimacy, the capacity of the coercive apparatus of the current military regime, and the role of external actors in Sudan’s current political crisis.

Dr. Khalid Mustafa Medani is Associate Professor in the Department of Political Science and the Institute of Islamic Studies at McGill University, and he has also taught at Oberlin College and Stanford University. Dr. Medani received a B.A. in Development Studies from Brown University, an M.A. in Development Studies from the Center for Contemporary Arab Studies at Georgetown University, and a Ph.D. in Political Science from the University of California, Berkeley. His research focuses on the political economy of Islamist and Ethnic Politics in Africa and the Middle East. Dr. Medani is the author of Black Markets and Militants: Informal Networks in the Middle East and Africa (Cambridge University Press, 2021). Based on long-term, immersive field research, Black Markets and Militants traces the relationship between economic globalization, the expansion of informal markets and the rise of distinct forms of identity politics in Egypt, Sudan, and Somalia. Dr Medani is presently completing another book manuscript on the causes and consequences of Sudan’s 2018 popular uprising and the prospects and obstacles for democracy in that country. In addition, he has published extensively on civil conflict with a special focus on the armed conflicts in Sudan and Somalia. His work has appeared in Political Science and Politics (PS), the Journal of Democracy, the Journal of North African Studies, Current History, Middle East Report, Review of African Political Economy, Arab Studies Quarterly, and the UCLA Journal of Islamic Law. Dr. Medani is a previous recipient of a Carnegie Scholar on Islam award from the Carnegie Corporation of New York (2007-2009) and in 2020-2021 he received a fellowship from the Woodrow Wilson International Center for Scholars to conduct further research on his current book manuscript on the prospects for a civilian democratic transition in Sudan.