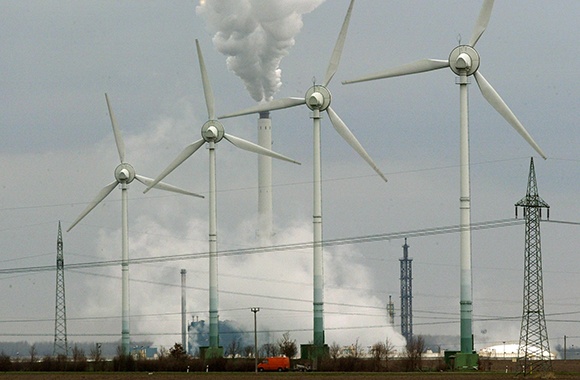 "The U.S. hasn't gone to war exclusively over oil per say, but you can't separate our use of force in this '25-year-war' in the Gulf from our energy decision making."

"It's not that there's been no investment in renewable energy--there's actually been quite a lot. But governments need to figure out the right way to do it. Rather then investing in renewable energy as fast as possible, we need to make it sustainable in the long term."

Dr. Urpelainen offered a historical perspective on how governments generally shift from little investment to significant investment in renewable energy. He outlined three stages, one in which governments decide the need for renewable energy exists, the second in which politicians face political struggles between those in favor and those against investment, and a third phase in which renewable energy becomes part of conventional energy planning. At this point, conflict and debate about costs and benefits become normal elements of policy discussions.

Because of oil shocks in the 1970s, politicians and informed members of the public shifted toward investment in renewable energy. As the idea became more popular, Urpelainen explained, governments faced significant pushback from oil and gas industries. These debates were sparked during the Reagan administration.

Urpelainen argued that the politics of energy could not be divorced from the policy of energy.

Because resource-rich governments do not have to rely heavily on taxation, they are less accountable to their people. Resource wealth makes states weaker, and hinders the building of institutional capacity. She explained that natural resources, "being the only game in town," create high incentives for control of government ("elite capture") and encourage patronage behavior.

Eventually, conflict between individuals and among groups becomes the primary route for advancing economic claims and attempting to deal with institutional weaknesses. As the government of East Timor spends its resource wealth on certain factions but not others, she argued, questions arise about deservedness and class conflict is exacerbated.

Dr. Barma offered multiple policy recommendations for countries affected by this type of conflict. She argued in favor of transparency initiatives including international agreements under which states must report on how much money the government attains from resources, where cash flows, and how much extraction companies are making.

Dr. James Russell focused his comments on the ways in which energy security has infused its way into military conflict: "The U.S. hasn't gone to war exclusively over oil per say, but you can't separate our use of force in this '25-year-war' in the Gulf from our energy decision making."

Dr. Russell argued that what started out as a realistic concern about the United States' energy supply has shifted into something else entirely.

"We've become the regional guarantor, and the referee for regional disputes. Unintended consequences of militarized energy policy prove to be far more strategically significant than any original concerns," he said.

In response to a question about the future of international efforts to curb carbon emissions Dr. Johannes responded that, "Renewable energy won't solve climate change. But it is significant because it makes governments think there's something they can do. There's a useful political element to renewable energy.”

Dr. Barma answered a question about the role corporate actors play in these issues. She explained that corporate actors, in their extractive practices, "set the tone for the ways in which resource revenues get funneled through the system." The problem with state-owned enterprises, she reiterated, is lack of transparency, which can lead to conflict.

Professor Colgan praised all three speakers for offering historical contextualization as well as policy prescriptions for future directions in energy security and policy.

Sabin Ray '15, a student in Professor Colgan's Geopolitics of Oil and Energy course, said, "We've been looking at these types of case studies since January. Having environmental security as an element of the discussion was an unexpected surprise--this was a fantastic opportunity."

Learn more about the event