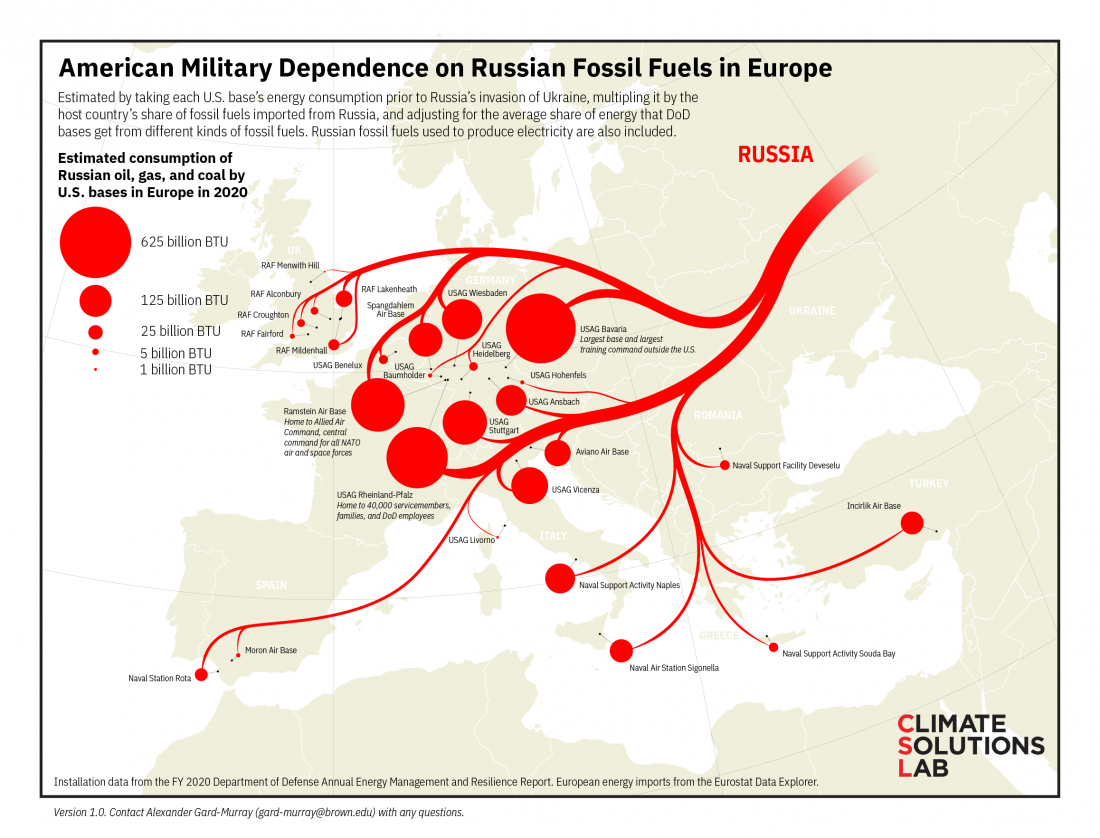 The U.S. military’s dependence on fossil fuels has created a crucial security threat for its European bases. American taxpayers could inadvertently be helping to fund the Russian war effort to the tune of a million dollars a week.

We estimate that before Russia’s invasion of Ukraine, U.S. bases in Europe relied on Russian fossil fuels to meet 30% of their annual energy needs. This means that American forces in Europe have been buying the energy equivalent of nearly half a million barrels of oil from Russia every year.

In light of Russia’s pending cutoffs of gas to European countries, the Department of Defense’s dependence on fossil fuels represents a serious threat to American and Western European security. Until the U.S. invests in sustainable energy sources and base electrification, these threats will continue.

The accompanying map shows the extent of this dependence across U.S. installations in Europe. According to the Department of Defense's Annual Energy Management and Resilience Report (AEMRR), U.S. installations in Europe consumed nearly 9 trillion BTU of energy in 2020, equivalent to 1.5 million barrels of oil each year. According to data from the Department of Energy, U.S. military installations consume 49% of their energy in the form of electricity, 37% from natural gas, 6% from oil, and 3% from coal.

To estimate base-level dependence on Russian fossil fuels, we assumed that each base’s energy profile matched that of the average installation. This gives us an estimate of each base’s consumption of electricity, natural gas, oil, and coal. We then multiplied these consumption estimates by host countries’ share of imports from Russia, using data from Eurostat. In the case of electricity, we first calculated the share of electricity generated from each fossil fuel, and then adjusted those shares for Russian imports as well.

As an example, consider Ramstein Air Base in Germany. Ramstein is home to Allied Air Command, the central command for all of NATO’s air and space forces and is the largest community of U.S. personnel overseas, with more than 53,000 American servicemen and their families.

According to the AEMRR, Ramstein consumed 929 billion BTU of energy in 2020. If Ramstein follows the average energy profile for U.S. bases, it would have gotten 342 billion BTU (37% of 929) from natural gas. Since Germany gets 65% of its natural gas from Russia, we estimate that Ramstein uses 223 billion BTU of Russian natural gas each year (65% of 342)—roughly 24% of Ramstein Air Base’s energy. With fuel prices elevated by the invasion, Ramstein alone could conceivably be paying more than $4 million to Russian oligarchs every year.

Applying this method to all U.S. military installations in the AEMRR and to all fossil fuel sources, we arrive at the total estimate of 2.7 trillion BTU (or 470 thousand tons of oil equivalent).

To project costs we use data from the Centre for Research on Energy and Clean Air, which estimates that EU imports of Russian fossil fuels since the beginning of the invasion have cost 46 billion dollars. We convert this to a cost per day and use Eurostat data on 2020 imports from Russia to estimate an average cost per BTU (this is likely to be an underestimate of the cost, since imports have fallen even in the absence of bans). We then apply this to our estimate of U.S. consumption of Russian fossil fuels, arriving at a projected cost of $56 billion if prices remain at their current levels.

These estimates are not perfect. Prices are likely to change. Russia is already cutting off supplies to some countries. Without installation-level data on energy sources, we do not know exactly which fossil fuels are being used in which base. But these are also conservative figures, since they only include installation and not operational energy. They also only include U.S. bases. Including those of our NATO allies would show an even greater threat.