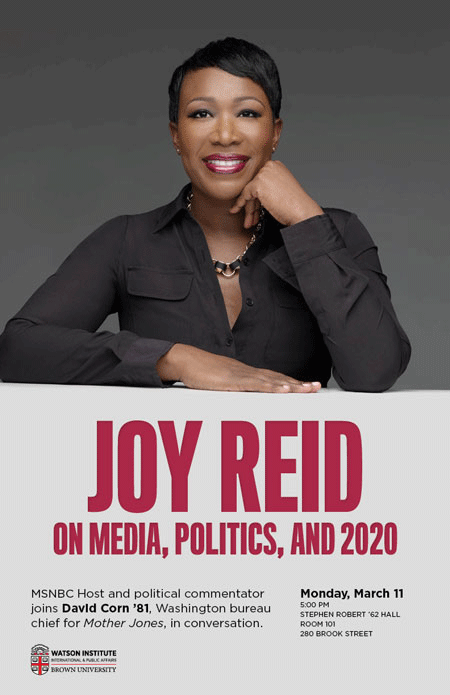 Joy-Ann Reid is a political analyst at MSNBC and host of “AM Joy,” which airs Saturdays and Sundays from 10 A.M. ET to noon ET. She is the author of the book Fracture: Barack Obama, the Clintons and the Racial Divide (William Morrow/Harper Collins 2015) and the co-editor, with Washington Post columnist E.J. Dionne, of We Are the Change We Seek: The Speeches of Barack Obama (Bloomsbury, 2016).

Her columns and articles have appeared in The New York Times, The Guardian, the Miami Herald, New York Magazine, The Daily Beast and other publications.

Reid is the former managing editor of TheGrio.com, a site exploring issues of importance to African-Americans, and the former host of The Reid Report, a daily news program on MSNBC. She has previously worked in local TV news, as a talk radio producer and host, and in politics as a Florida press secretary for America Coming Together (2004) and a Florida press aide for the Barack Obama campaign (2008).

Reid graduated from Harvard University with a concentration in film in 1991. She is a former Knight Journalism fellow (2003) and previously taught a course in “race, gender and media” at Syracuse University's Newhouse School of Communications’ New York City annex (2017-2018).