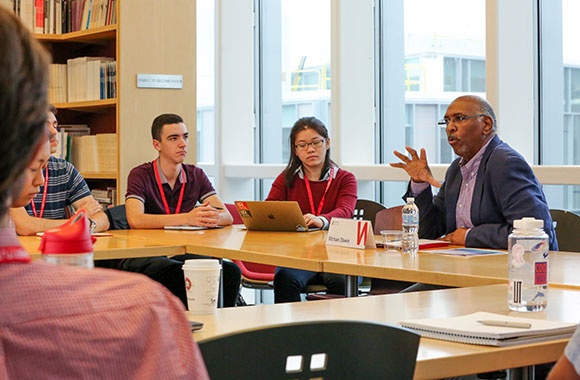 This semester, students from a variety of disciplines and backgrounds flocked to Watson Institute classrooms to engage with senior fellows in three distinct, discussion-based study groups. The seminars were lead by former president of CNN/US Jon Klein ’80, Democratic National Committee Chair and the Secretary of Labor under Obama Tom Perez ’83,  and former Republican National Committee chair and Lieutenant Governor of Maryland Michael Steele. Challenging students to consider the shifting political and media environments, the non-credit seminars combined practitioner-led discussions with engaging readings and visits from guest speakers.

This spring’s “Leadership and Governance in Turbulent Times”  was the fourth study group Perez has led. With a focus on leadership, the seminar challenged students to think critically about problem solving in the “turbulent times” that the current political environment has created.

Political science and economics concentrator Ijahala Pottinger ’20 first met Perez last semester when he gave a talk to students participating in the Brown in Washington program. Pottinger, then an Education Policy intern for the U.S. Senate Committee on Health, Education, Labor, and Pensions, found Perez’s talk to be “very inspirational.” She emphasized that in both the talk and the seminar, Perez offered “gems of knowledge that are short and concise, but very easy to keep in mind.”

The five-week seminar began with a lecture from Perez that laid the groundwork for how students should approach the seminar’s topics throughout the semester, as they considered “how one should exercise leadership in unclear paths,” Pottinger said. The following weeks were largely based in discussions, which were often accompanied by presentations from guest speakers, including Governor of Rhode Island Gina Raimondo.

In the syllabus, Perez wrote that a primary goal of the course was to merge “theory and practice” while focusing on problem solving. Pottinger saw this focus exhibited in the group’s approach to a case study they considered, which told of an undocumented worker who was denied his minimum wage paycheck. Through discussion, the group determined multiple potential actions they could take to assist their client. After their ideas had been documented, “Secretary Perez showed us how to come to the best outcome, or the best route of action, based on potential conflicts that could arise out of each of the suggestions.”

Now, Pottinger said that her “knowledge is so much more elevated, because I’m able to think about a certain topic in so many ways, which I think is very valuable.”

Moving forward in her academic and career pursuits, Pottinger is inspired to “continue taking advantage of these opportunities, because they are so special.”

For aspiring television writer Amelia Spalter ’22, the opportunities created by Jon Klein’s seminar, “News vs. Truth,” resulted in a “surreal” experience. The discussion-based seminar offered students the opportunity to engage directly with Klein, allowing Spalter to gain perspective that might be unavailable in a typical class or workplace environment. It also offered students considering journalism as a career, like Felipe Félix Méndez ’22, the opportunity to converse with peers who “shared similar interests … [in a] very fun and engaging experience,” he said.

The seminar was also lead by Professor of Cognitive, Linguistic, and Psychological Studies Steven Sloman, who provided another lens on the topics of truth and media, lecturing on “the psychology behind what we believe and why we cling to it,” according to the course syllabus. Other weeks focused on “News vs. Opinion,” “Using the News,” and “Creating and Detecting Fake News.”

Throughout, the group discussed how there can be “a unified national conversation when there is so much essentially asymmetric information” while constantly considering how to avoid having “so much siloed information,” Félix Méndez said.

“In some ways, it gave me more hope. And, in some ways, things appear more bleak than ever,” Spalter said, speaking to her understanding of the current political and media environment after the seminar discussions. The course gave her and her peers the opportunity to work through and understand “the different biases that the networks are coming from,” as Klein offered first-hand knowledge from his position as the former president of CNN/US.

Along with Professor Sloman, the seminar featured various guest speakers, including Skype calls with television personality and journalist Anderson Cooper and MSNBC anchor Chris Hayes ’01. The course offered Spalter and her peers the opportunity to engage with Klein and the guest speakers “in more of a discussion format, that was different than the usual lecture format that you’d see at Watson. That was exciting,” she said.

Beyond the seminar, Klein provided office hours for students, which Spalter saw as an added bonus of the course. “If you came, he would sit and talk to you for as long as you had questions … [and] they could be relevant to the seminar or not relevant to the seminar.” Further, many of the guest speakers also provided their contact information, so that conversations begun in the course could continue.

This willingness to converse with students, Spalter said, speaks to “the accessibility of everyone involved [with the seminar] and their eagerness to help students.”

While the group understood the difficulty of finding solutions to the problems they discussed, Méndez said that the seminar inspired him to think more critically about media biases and polarization — in the United States and his home country of Panama. “I try to think about the news environment in my country in a much more critical way, beyond the basics that I would have known before the seminar,” he said.

Steele considers the “madness and the methods” of political parties

The former chair of the Republican National Committee led his second seminar this spring, after joining the Watson as a senior fellow in the fall. In “The Dismantling and Rebranding of American Politics” he asked students to interact with guest speakers as they discussed the changing political atmosphere and its potential outcomes.

In the seminar’s syllabus, Steele detailed how the group would “look at both the madness and the methods of our political parties in the fight for domination and electoral success,” noting that group would consider if “the emergence of Donald Trump and Bernie Sanders may signal not just a profound transformation of both political parties but their eventual end.”

Zachary LaPorta, a computer science masters student, enrolled in the seminar to continue pursuing a personal interest in politics, which he fostered while studying philosophy and economics at Rutgers University.

While Steele opened each meeting with small lectures that gave the group “a foundation that everyone could participate in the discussion off of,” LaPorta explained that most of the one-and-a-half hour time block was left to the group, allowing for ample discussion and questions. “I feel like we’re all pretty comfortable with each other,” LaPorta said, adding that the setting made it so that “no one feels pressured to contribute or talk,” allowing for free-flowing discourse.

One week, the group was visited by David Bossie, chairman of Citizens United and Donald Trump’s Deputy Campaign Manager in 2016. Bossie was an architect of the Supreme Court case Citizens United vs. FEC, which decided that it was unconstitutional to prohibit corporations and unions from making campaign contributions in federal elections. “The fact that we were able to sit down and really talk to [him] about why he brought the case to the Supreme Court [and] how he felt about the impacts it has had on the country … was a very unique opportunity,” LaPorta said. “I wouldn’t have been able to get that anywhere else, even in a normal politics course,” he added.

Throughout the course, Steele’s commentary gave LaPorta the chance to consider how politics has shifted in recent years. “Hearing about his own experiences over the last couple of years … has really reinforced my idea that we’re in a period of significant generational change in terms of party alignment,” LaPorta explained.