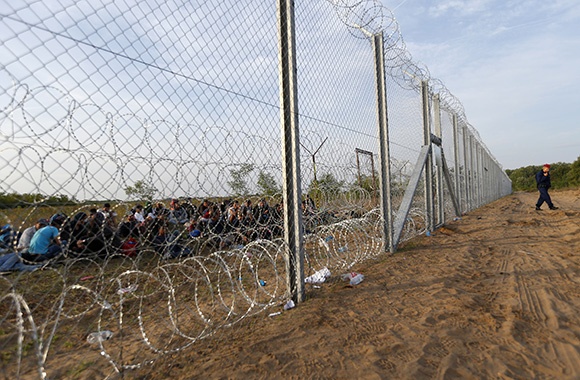 With over 6,500 members, the ISA is the premier organization for connecting scholars and practitioners in fields of international studies.

This week, scholars from the Watson Institute will be participating in the 57th Annual International Studies Association (ISA) Conference in Atlanta, Georgia. A group of eight postdoctoral fellows, senior fellows, and faculty members will join scholars from universities and institutes around the world on a number of panels ranging from International Political Economy, Security, Ethnicity, Nationalism, and Migration Studies. With over 6,500 members, the ISA is the premier organization for connecting scholars and practitioners in fields of international studies. Founded in 1959, it promotes research and education in international affairs.

Patricia Agupusi will appear in three presentations: two Ethnicity, Nationalism, and Migration Studies panels, as well as one on International Political Economy. A Postdoctoral Fellow in International and Public Affairs, Agupusi is a political economy scholar who studies why some people, groups, and societies are poor, underdeveloped, unequal and violent, and how institutional arrangement and governance can foster development, mainly in parts of Africa.

Peter Andreas will be participating in three discussions including a panel on his co-authored paper providing a micro‐foundation for understanding the dynamic interaction between the state and unauthorized migration flows. Andreas is the John Hay Professor of International Studies and Political Science, whose research ranges from borders and smuggling, transnational crime and crime control, and political economy and armed conflict, to immigration control policy and drug control policy.

Robert Blair will be participating in two discussions including “Trust After Ebola” and “Innovations in the Study of Peacekeeping and Peacebuilding,” on which he is also a chair.

He is the Joukowsky Family Assistant Professor of Political Science and International and Public Affairs, and focuses his research on peacekeeping and statebuilding after civil war, with an emphasis on law and security institutions.

Chris Clary will be participating on the “Strategic Behavior of Nuclear Weapons States – Leaders and Nuclear Abandonment” panel. A Postdoctoral Fellow in International and Public Affairs, Clary’s research focuses on the sources of cooperation in interstate rivalries, plus the causes and consequences of nuclear proliferation, U.S. defense policy, and the politics of South Asia.

The Richard Holbrooke Assistant Professor of Political Science and International and Public Affairs, Jeff Colgan will be taking part in five panels including one on the Committee on the Status of Women, a Comparative Interdisciplinary Studies panel, Exploring Peace-themed discussion, a “Paying for War and Security” roundtable, and as both a chair and discussant on an International Security Studies panel. Colgan researches energy politics, causes of war, and political revolutions.

Senior Fellow of International and Public Affairs, Sue Eckert will chair two panels, “Developing Peacetime Norms in Cyberspace” and “Bridging the Political Economy and Security Gap.” She will also participate in a roundtable on UN Sanctions, as well as a discussion on international education, exploring the role of educational partnerships in narrowing the civil-military gap. Eckert’s research focuses on the intersection of security and economics, and her new book, Target Sanctions: The Impacts and Effectiveness of United Nations Action, will be available for purchase at the conference.

John Garofano will participate in one presentation on international education. A visiting scholar in International and Public Affairs, his research interests include military intervention, Asian security, and the making of U.S. foreign policy. Garofano was previously the Academic Dean at the U.S. Naval War College.