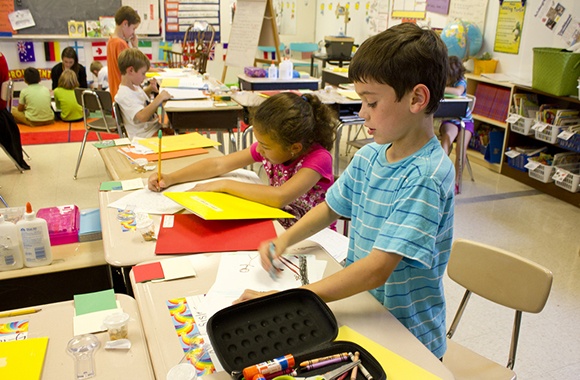 “My findings are broadly consistent with the notion that many school environments are not conducive to boys’ success."

Providence, RI [Brown University] – A new study finds that behavioral problems in early childhood have a larger negative effect on high school and college completion rates for boys than girls, which partially explains the substantial gender gap in educational attainment that currently exists in the United States.

“When I compared 4- and 5-year-old boys and girls who had the same levels of behavior problems — including difficulty sustaining attention, regulating emotions, delaying gratification, and forming positive relationships with teachers and peers — I found that boys were less likely to learn and more likely to be held back in school,” said sociologist Jayanti Owens, a professor at Brown University’s Watson Institute for International and Public Affairs and author of the study.

“My study also showed that the way schools respond to boys' behaviors plays a significant role in shaping their educational outcomes years later. Relative to the other early childhood family and health factors I considered, gender differences in both students’ behavior and educators’ responses to behavior problems explained more than half (59.4 percent) of the gender gap in schooling completed among adults.”

Titled “Early Childhood Behavior Problems and the Gender Gap in Educational Attainment in the United States,” the study examines how systematic responses to children’s behavior at school vary by gender and help determine overall educational attainment, which is closely linked to success in adulthood.

Owens draws on a national sample of children born to women in their early to mid-20s in the 1980s and followed into adulthood. “Although the same behaviors have a worse impact on boys’ education, it is also the case that on average boys start school with higher levels of behavioral problems than girls,” Owens said. “That boys typically have worse behaviors when they start school may help explain why their behaviors are more detrimental to achievement — stereotypes about boys’ bad behavior may cause educators to take more and harsher actions against male students. This process may lead to a compounding and cyclical relationship between boys’ behavior problems and lower achievement.”

According to Owens, typically boys and girls have divergent experiences at school. “It’s partly because boys come to school with higher levels of behavior problems, and partly because of the ways boys’ behaviors tend to be treated by teachers, peers, and administrators,” she said.

“My findings are broadly consistent with the notion that many school environments are not conducive to boys’ success,” Owens said.

As the U.S. Census Bureau reports, in 2014, men comprised 50 percent of students enrolled in ninth grade, but they received 48 percent of high school diplomas. Men also comprised 43 percent of college enrollees in 2014, and were awarded 40 percent of bachelor’s degrees.

However, Owens’ research also offers hope for narrowing the education gap by increasing boys’ learning and, ultimately, educational attainment. “While I found that early behavior problems persisted into adolescence for many, problems at school were less predictive of long-term educational attainment when they first emerged at older ages,” Owens said. “Supportive home and school contexts that proactively encourage the early development of self-regulation and social skills and help make school more relevant to pre-existing interests can do a lot for boys’ long-term success. For example, NBA Math Hoops™ and Rhymes with Reason™ are just two curricular innovations for teaching math and vocabulary, respectively, by tapping into pre-existing sports and music interests.”

Jayanti Owens is the Mary Tefft and John Hazen White, Sr. Assistant Professor of International and Public Affairs and Sociology at Brown University’s Watson Institute for International and Public Affairs, with an affiliation at the Population Studies and Training Center. Owens’ research focuses on the causes of gender, racial/ethnic, and immigrant educational and labor market inequality. Her work has appeared in journals including Sociology of Education, Social Science Research, and Ethnic and Racial Studies.

About the American Sociological Association (ASA)

The American Sociological Association (www.asanet.org), founded in 1905, is a non-profit membership association dedicated to serving sociologists in their work, advancing sociology as a science and profession, and promoting the contributions to and use of sociology by society.

The Sociology of Education is a quarterly, peer-reviewed journal of the ASA.

The research article described above is available by request for members of the media. For a copy of the study, contact Daniel Fowler, ASA Media Relations Manager, at (202) 527-7885 or pubinfo@asanet.org.