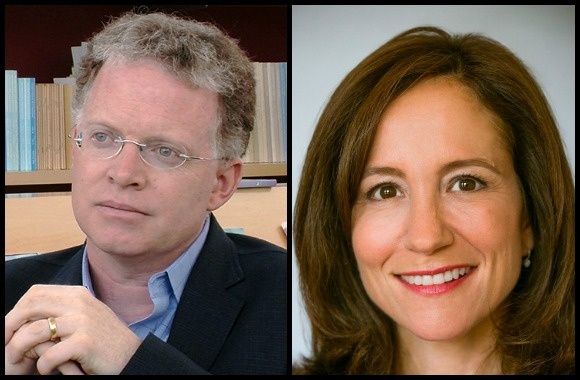 New Prestigious Fellows to Bring Real-World Experience to the Classroom

Continuing the tradition of bringing talented practitioners to campus to share their knowledge and experience with students and scholars through teaching and engagement, the Watson Institute welcomes two new visiting fellows in international and public affairs this semester, both alumni of Brown.. Pamela Reeves ’87 and David S. Rohde '90 LITD'10 hon. will each teach a course in the International Relations program.

Pamela Reeves is an advisor to the Office of Melinda Gates on global women’s issues.  She previously served as director of Secretary Hillary Rodham Clinton’s International Fund for Women and Girls. She has also served as senior advisor to the Nike Foundation, where she designed the Girl Declaration program and built international support for the global development agenda for adolescent girls, and to the United Nations Foundation on Data 2X, an international effort to collate and analyze multi-sectoral, gender-focused data.

Reeves, who earned her AB in international relations from Brown, will teach a course titled “Global Women’s Issues: Investing in women as a strategy for sustainable growth and global development.”

According to Reeves, the objective of the course, which will involve a number of prominent guest lecturers, “is to encourage new understanding about the players, approaches and potential in global women’s issues, which should foster a more critical and strategic approach to global development and growth issues.  This class seeks to provide students with a ‘real world’ perspective on how things get done in international relations.”

David S. Rohde is the National Security Investigations Editor at Reuters and a Contributing Editor at The Atlantic magazine. He is a two-time winner of the Pulitzer Prize for International Reporting, the author of three books, and a former foreign correspondent for the New York Times and Christian Science Monitor.

His most recent book is Beyond War: Reimagining America's Role and Ambitions in a New Middle East. He is also the author of Endgame: The Betrayal and fall of Srebrenica, Europe's Worst Massacre Since World War II, and co-author with his spouse, Kristen Mulvilhill, of A Rope and a Prayer: The Story of a Kidnapping, an account of his 2008 kidnapping in Afghanistan by members of the Taliban, and his eventual escape following seven months in captivity.

Rohde, who earned his AB in history from Brown, will teach a course titled “Richard Holbrooke and the rise and fall of American power.”

According to Rohde, who covered and knew Holbrooke for more than twenty years, “To an uncanny extent, the life of Richard Holbrooke mirrors the rise and fall of American power in the late 20th and early 21st centuries. “ Students will use the real-world triumphs and frustrations of Brown graduate and American diplomat Richard Holbrooke to debate what American foreign policy should be today.

Holbrooke, who worked for every Democratic president since John F. Kennedy, spent his 20s trying to broker peace in Vietnam, miraculously succeeded at bringing peace to Bosnia in his 50s, and died of heart failure at 69 while trying to implement a “civilian surge” in Afghanistan. His life will be used to explore three pivotal US military interventions – Vietnam, Bosnia and Afghanistan – and how they revealed the promise and limits of American power.