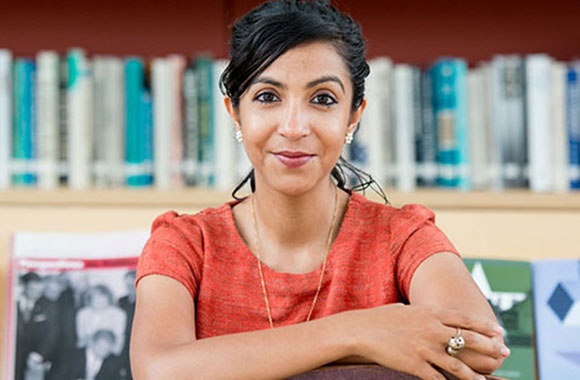 "By highlighting the potential inter-linkages between different policy arenas, such as initiatives in arts and culture and social policies, my book encourages policymakers not to approach social policy in isolation."

A Sense of We-ness

Exploring Why People in Some Places Lead Better Lives

Prerna Singh, Mahatma Gandhi Assistant Professor of Political Science and a faculty fellow at the Watson Institute, has received the Woodrow Wilson Foundation Award and the Barrington Moore Book Award for her book, How Solidarity Works for Welfare: Subnationalism and Social Development in India. She also received the prestigious Gregory Luebbert, Mary Parker Follett, and Sociology of Development awards for her article “Subnationalism and Social Development: A Comparative Analysis of Indian States,” which appeared in the journal World Politics last year.

W: What was the inspiration behind How Solidarity Works for Welfare?

PS: The quality of life that a person leads depends critically on where she leads it. It is well known that the residents of Scandinavian nations enjoy a far higher standard of living than the citizens of countries in Central Asia or Latin America. More puzzling is the fact that people living in countries in the same region of the world also lead dramatically different kinds of lives. In Latin America, an infant is over three times more likely to die before his first birthday if he is born in Bolivia rather than in adjoining Argentina. A woman in Iran is nearly twice as likely to be literate as her counterpart across the border in Pakistan. What is most striking is that variations of this kind persist even within national boundaries.

For example, Indian states are characterized by the same democratic regime and have virtually identical legal, financial, and electoral institutions. Yet while some Indian states have attained levels of social development—defined as the education and health of the population—approaching those enjoyed by middle-income, industrialized countries, other states have fared worse than the worst-performing countries in sub-Saharan Africa. In the 1990s, if you were a rural woman in the state of Kerala (which is about the demographic size of Canada) you were likely to live 20 years longer and were three times more likely to be able to read and write than your counterpart in the north central Indian state of Uttar Pradesh. Why?

This is a puzzle that first struck me many years ago, living in and visiting different parts of India, and for which I had yet to find a convincing explanation. This was the inspiration for the book.

W: What are the key features and benefits of your book?

PS: There is a large and influential scholarship across the social sciences on the determinants of social welfare. This book introduces a provocative argument for the power of shared solidarity as an impetus for welfare policy and outcomes.

In my research I combined multiple methods—a comparative historical analysis of five Indian states that begins in the mid-19th century and a statistical analysis of all Indian states from the 1960s onward—to show that Indian states that witnessed the emergence of a shared subnational solidarity, or subnationalism, were more likely to institute and maintain a progressive social policy and witness better developmental outcomes. Fusing together insights from social psychology and political philosophy, I argue that a shared identification generates affective bonds—a sense of “we-ness”—and promotes a sense of mutual obligations and a prioritization of collective, not just individual, interests. Elites bound by such solidaristic ties are more likely to push for progressive social policies that further the welfare of the subnational community as a whole.

This argument marks an important break from, on the one hand, existing theories about social welfare, which emphasize the importance of economic development, social democratic parties, and the nature and extent of electoral competition and ethnic diversity, and, on the other hand, from the dominant negative view of identity politics for welfare.

W: What are the policy implications of your work?

PS: The primary policy recommendation that emerges from this book is that, as far as possible, there should be an overlap between the locus of social policy-making and social solidarity. This gives rise to two sets of suggestions.

First, the jurisdiction over social policy should be vested with the political-administrative unit with which citizens most strongly identify. There are arguments out there both for and against decentralization. My research suggests that a judgment about which is better for social development cannot be reached without also considering the question of which political-administrative unit commands the primary allegiance of the people.

A second important implication is that in addition to direct interventions in the social sector, such as literacy campaigns or vaccination drives, policies aimed at fostering a shared identity and solidarity among residents of a state could also play an important role in promoting social development. This opens up an entirely distinct realm of possible policy interventions for improving education and health outcomes. For example, the promotion of state language, arts, and cultural forms; designation and celebration of “state days” and festivals; and glorification of state heroes—such efforts are likely to foster subnationalism and, in doing so, can further social policy and development.

By highlighting the potential inter-linkages between different policy arenas, such as initiatives in arts and culture and social policies, my book encourages policymakers not to approach social policy in isolation. It also shows the potentially constructive aspects of expenditures often seen as “wasteful,” such as the state sponsorship of festivals, renaming of roads and cities, and the erection of statues.

W: Who should read your book?

W: How does it feel to have garnered so much praise for this work?

PS: It is obviously a tremendous honor to have won the prizes for the book and the article it’s based on. It’s especially nice to have been recognized by both the disciplines of political science and sociology. All of this is very special because this is my first book, and it focuses on a problem I feel very strongly about. We live in a world in which millions of people continue to be denied access to even the most basic social services. This is clearly unacceptable. But I am hopeful that the attention that the book is receiving might go some way in alerting scholars and practitioners to the power that a shared solidarity can play in addressing this problem.

A discussion of the book will take place Friday, September 16, 2016, by a multidisciplinary panel of experts.

In the End is the Beginning – The Indian Express

Book Review – The London School of Economics and Political Science