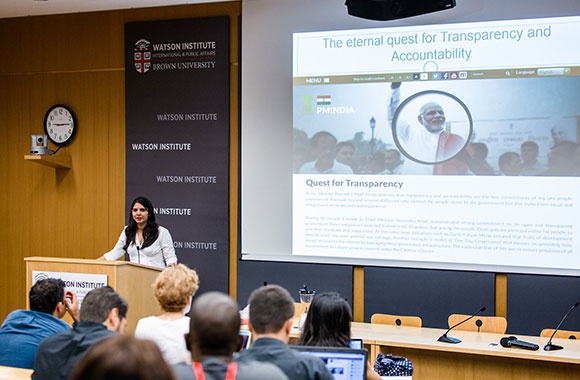 “What happens when the ‘rubber meets the road?’ Aiyar’s Accountability Initiative is unearthing data to answer this question.”

“The narrative of [government] transparency and accountability in India is … the aspiration, regardless of political leanings,” said Yamini Aiyar, senior fellow at the Centre for Policy Research in India, and director of the Centre’s Accountability Initiative. Speaking yesterday at the Watson Institute’s annual global conference, the Brown International Advanced Research Institutes (BIARI), Aiyar discussed the challenges facing India’s emerging welfare state. Because state services, including education, access to water, road building, healthcare and security are so abysmal, India’s middle class and elite class rarely, if ever, use them.

“Being an ordinary citizen in India can be the equivalent of hell on earth,” despite having state-sanctioned rights to work, food security, sleep and access to information, said Aiyar, a TED fellow and member of the World Economic Forum’s global council on good governance.

Aiyar has done more important research on the question – How do you go from the center [of government] to the infamous last mile? –  than anyone else I can think of, said Patrick Heller, director of the Graduate Program in Development at Watson and professor of sociology and international and public affairs.

“She’s one of the more renowned research scholars affiliated with the Centre – one of India’s most vibrant independent think tanks,” Heller said. By monitoring government planning, budgeting, and decision-making in key social sectors, Accountability Initiative researchers bridge the divide between evidence and action and convene groups of citizens, policy makers, and government officials to act for the greater good. “What I found so amazing about the research being done in the Accountability Initiative [is that it] actually takes you through the chain of accountability and identifies some of the problems,” said Heller.

Aiyar and her Accountability Initiative colleagues collect, scrutinize, and analyze massive quantities of original data on social service government programs. “A program [like education] in India, a country of more than 1.3 billion people, has to travel through all the states and villages of India after starting in the capital, Delhi,” said Heller, a co-convener of the Governance and Development in the Age of Globalization Institute during BIARI.  “What happens when the ‘rubber meets the road?’ Aiyar’s Accountability Initiative is unearthing data to answer this question.”

What happens is troubling, at best: Vast numbers of India’s teachers don’t show up for work; when they do, there’s no guarantee they come to the classroom and actually teach. One independent study from 2010 found that many fifth graders couldn’t decipher a second-grade text, despite significant increases in government investments in education. Inflexibility reveals local bureaucrats’ refusal or inability to think and act creatively: When orders came down from a higher government entity to purchase fire extinguishers for every school, some local officials did so, despite having no physical building for the school.

Efforts within India to regularize accountability and transparency within the government of India, the world’s largest democracy haven’t led to systemic change. Local bureaucrats view their responsibilities as responding upward – to a bigger government entity – rather than to citizen complaints or concerns. Accountability requires a bureaucrat see himself not as a cog in the wheel and as separate from the government, but as an agent of change who responds to people, said Aiyar. Systems need a certain amount of accountability, yet must empower bureaucrats with enough discretion and authority to be responsive and engage with citizens. “It requires a nimble approach; a lot of our work [at the Accountability Initiative] is about that.”