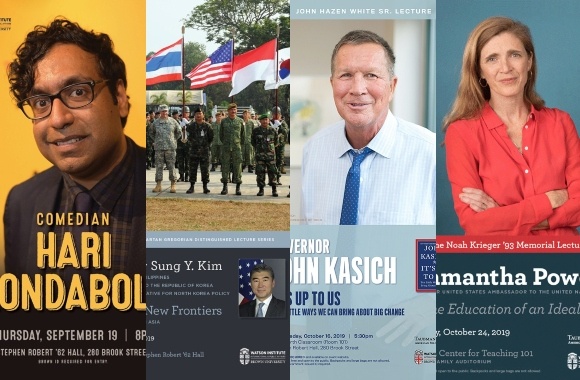 Notable Events at Watson this Fall

It’s a commonplace, but no less true, to say that summer flies by in a flash -- and this year is no exception. We hope yours was restful, because the Watson Institute’s fall programming is full of can’t-miss people and events. To help us understand what’s happening in the world, Watson has invited diplomats, heads of state, prominent public figures, and some of America’s finest journalists to share their insights and expertise.

Kicking off the semester is Hari Konadabolu, a stand-up comic, actor, and director best known for his documentary film, The Trouble with Apu. What is perhaps less well known about Kondabolu, whose comedic material often deals with serious social issues, is that he earned a master’s in human rights from the London School of Economics.

For first-years and sophomores who are seeking guidance in the realms of politics, public policy, advocacy, development, social-science research, and more, Watson will hold a series of discussions with young alumni who are professionals in the fields of international and public affairs. The series kicks off with Nimita Uberoi '15 from the Obama Foundation and Cambridge City Council Member Sumbul Siddiqui '10.

Political leaders both domestic and international will speak about their experiences. Republican John Kasich, former governor of Ohio and prominent critic of President Trump, will deliver a public lecture, as will Atifete Jahjaga, former president of Kosovo and deputy director of the Kosovo Police.

At a time when a free press has never seemed more important or more threatened in this country, Jeffrey Goldberg, editor in chief of The Atlantic, will interview and National Book Award-winner George Packer, a writer for The New Yorker, on his new book, “Our Man: Richard Holbrooke and the End of the American Century.” A. G. Sulzberger ’03, publisher of the New York Times, will deliver the University’s Ogden Lecture this month. Edward-Isaac Dovere, staff writer for The Atlantic and former chief Washington correspondent for POLITICO, will hold a study group for students, as will Michael Steele, former Republican National Committee chair, and Tom Perez ‘83, former Democratic National Committee chair.

And that’s not all. For complete information about all of Watson’s events, visit our events page. And to be sure you don’t miss a thing, sign up for our weekly newsletter.