John Hazen White Sr. Lecture ─ John Kasich ─ It's Up to Us: Ten Little Ways We Can Bring About Big Change 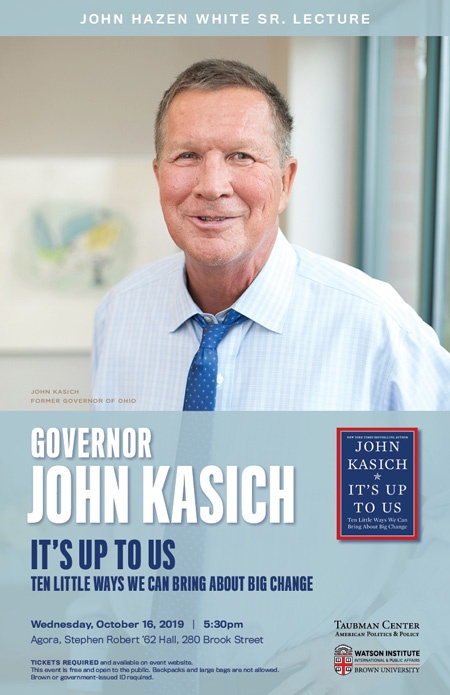 Tickets are required and limited and a Brown or government-issued ID is required for entry to the event.  Please sign up for tickets here.

Audiences might be surprised to hear former Governor John Kasich say that he's not very interested in politics. After listening to his impassioned thoughts on the state of our nation, however, you'll understand where he’s coming from. Gov. Kasich believes that we need to reach beyond the issues that divide us to achieve solutions through unity and resilience. With a focus on civility and purpose, Kasich offers insight into a view of humanity that inspires self-reflection, invites action and motivates all of us to strive to be better citizens.

Two-term former Ohio Governor John R. Kasich is a politician, a New York Times best-selling author, a former FOX television host, and ultimately an American citizen who believes that unity is the answer to our most common problems.  Governor Kasich closed an $8 billion budget shortfall without a tax increase, reduced taxes by $5 billion and created an improved business climate that led to the creation of more than 500,000 new jobs in the Buckeye State. Under his tenure, Ohio budget reserves grew from 89 cents to $2.7 billion. The Governor was a leading voice in promoting bipartisan solutions to health care reform, immigration and international trade. He has been one of the few Republicans to advocate for Medicaid’s expansion. Kasich has had a storied career in both the public and private sectors. He served as a member of Congress from central Ohio for 18 years.  He was elected to the U.S. House at just 30 years old, after having become the youngest state senator in Ohio history. He went on to become the chairman of the House Budget Committee and balanced the Federal Budget four times—a feat not accomplished since. After leaving Congress in 2000, Kasich worked as a managing director in the Investment Banking Division of Lehman Brothers, where he helped companies secure the resources they needed to succeed and create jobs.  He was a FOX television commentator for two shows, Heroes and Heartland with John Kasich, in addition to being a stand in host for both Bill O’Reilly and Chris Matthews.  In January of 2019, Kasich made his debut as a Senior Political Commentator for CNN, where he will appear across a variety of programs.  Kasich is the author of four New York Times best-sellers: Courage is Contagious; Stand for Something: The Battle for America’s Soul; Every Other Monday; and most recently Two Paths: America Divided or United, which reflects on 2016 run as Republican Primary Presidential candidate and his hopes for America’s future. His next book, It’s Up To Us is scheduled for release October 2019.  Kasich is a graduate of The Ohio State University, where he also served as a Presidential Fellow. No longer Ohio’s Governor, he continues his roles as husband, father and American Citizen, eager for the next chapter.