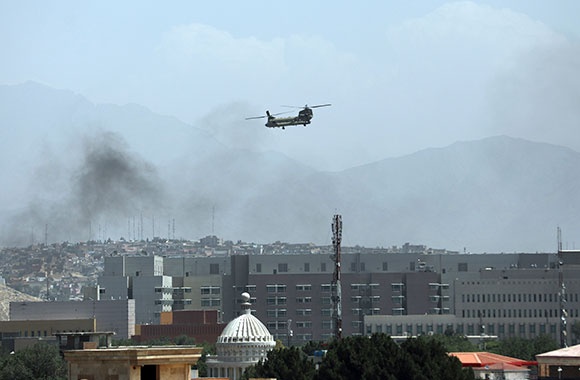 On October 7, 2001, the United States invaded Afghanistan and launched what many call the Post-9/11 Forever Wars. With the 20th anniversary of 9/11 (what the Costs of War Project calls “the 20-year mark of the post-9/11 wars”) and U.S. troops leaving Afghanistan, the Costs of War Project Co-Director and Watson Institute Senior Researcher Stephanie Savell, Ph.D., says, “This is an inflection point for us to take stock and ask: Why has the U.S. been engaged in these counter-terrorism wars? Are we meeting the goals of protecting Americans and others around the world? If not, what should we be doing instead?”

Looking to engage the Brown community and wider audiences, faculty at the Watson Institute are leading numerous events for reflection, analysis, and debate. The Costs of War Project is planning a September 15 keystone event involving several Watson and Brown experts entitled The Past, Present and Future of the U.S. Post-9/11 Wars: A 20-Year View. According to Savell, the program will offer opportunities to consider how the U.S. could change course going forward. The Forever Wars’ human and fiscal costs in the U.S. and in the affected countries (Afghanistan, Iraq, Syria, Lebanon, and Yemen, among others) are staggering: Some 929,000 people have died, including more than 300,000 civilians. More than 30,000 post-9/11 wars’ service members and veterans have committed suicide, four times as many as those killed in combat. The U.S. has spent an estimated $8 trillion, which includes a conservative obligated estimate of $2.2 trillion for future medical care for veterans.

“I’m very interested in de-exceptionalizing the Middle East; it’s often construed as this very strange, different and backward place,” says Robert Family Professor of International Studies, and Professor of Anthropology Nadje Al-Ali. As Director, Center for Middle East Studies (CMES) and a self-described scholar activist, Al-Ali says that the CMES engages students, faculty, and others with an interest in Middle East issues, both in the region and the diaspora.

The stories of Afghan women – who are often presented, unfortunately, in a crude way – will be told at CMES’ September 14 event, Afghanistan Lives: Then and Now, says Al-Ali, whose research focuses on women and gender in the Middle East, particularly around conflict and war. “We also want to address the diverse experiences of people living in Afghanistan.”

Al-Ali will also participate in the Costs of War September 15 panel on the personal costs of war on Iraqis, especially women.

“So often we talk about war in distancing and abstract language; we forget tha, at the heart of war are stories of real human suffering and death,” says Savell, noting the devastation of Afghanistan’s health care systems, the war widows who turn to heroin for emotional solace, the environmental damage, and the children who lose limbs after playing in areas riddled with explosive devices. “If we, as Americans, could do a better job keeping this huge human tragedy at the center of our decision-making, we’d think harder about going to war in the first place.”

Al-Ali wants to present perspectives that challenge the United States-centrism dominating these conversations. “It’s not that we shouldn’t speak about U.S. responsibility and the failure of U.S. strategies, but what often gets lost are the human dimensions and experiences of people in Afghanistan and Iraq, but also in the wider Middle East. I always have the ambition to reach [not just students and faculty, but] policy-makers, activists, the media, and the general public.”

Additional Afghanistan-related programming include a September 29 conversation between Ronald E. Neumann, president of the American Academy of Diplomacy and the former U.S. ambassador to Afghanistan, and Watson Institute Visiting Scholar J. Brian Atwood; and an Oct. 12 four-person panel titled Understanding the Crisis in Afghanistan. On September 1, 20 Years Later: The True Costs of our Post-9/11 Wars was the focus of a virtual Costs of War panel event for policymakers, journalists, and members of the general public.

While pleased that the Costs of War Project has become the “go-to resource” for media outlets, Savell says, “I am dismayed by all the talk focused on U.S. failed military strategies. A more fundamental question asks why we, as Americans, disregard human life. Afghanistan is not just a graveyard of empires; it’s a graveyard of Afghan people.”

While the consequences of these wars often are ignored by Americans without family members in the service, they impact us all, if only due to how those costs have shaped the federal budget: More than 50 percent of the discretionary budget spending goes to fund the military and military-related programs, says Savell. “So many experts and think tanks and strategists perpetuate myths that wars we enter will be quick, cheap, and effective, but they’re not. Research has shown that these post 9/11 wars have been incredibly counter-productive; more militant terrorist groups exist now than before 9/11.”

Learn more about these Watson Institute programs on Afghanistan