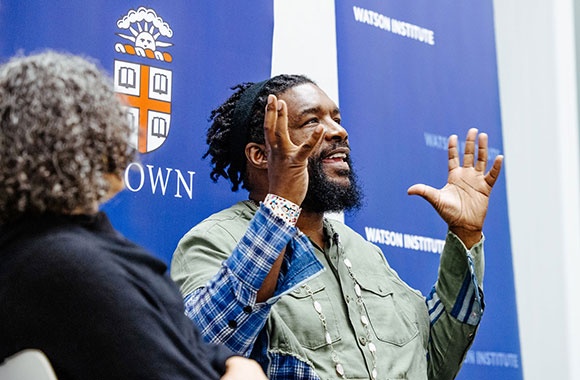 In a conversation held at the Watson Institute, the director of “Summer of Soul” shared how he resurrected 50-year-old, never-before-seen Harlem concert footage — and revealed what he left on the cutting room floor.

In the summer of 1969, the Harlem Cultural Festival brought some of music’s biggest acts to a park in New York City. Over six weekends, Black New Yorkers came in droves to see the likes of Stevie Wonder, Sly and the Family Stone, Nina Simone, B.B. King, the Staple Singers and countless other stars.

The festival was filmed extensively — but for 50 years, no one saw the footage. The Harlem Cultural Festival fell into obscurity, a hazy memory few could recall decades later.

Why were the film reels stowed away, unseen, in a basement for half a century? According to Ahmir “Questlove” Thompson, it’s partly because no one saw their gargantuan potential.

“At the end of the day… it was easily dismissed,” Thompson said. “This is show business: If it’s not an obvious knock out of the park [for profits], it’s very easy to dismiss.”

But Thompson wanted to put an end to those decades of dismissal. With permission from the festival’s film director, he and Joseph Patel, an award-winning producer, spent months reviewing dozens of hours of footage, editing it down to create the concert film “Summer of Soul,” released in 2021 to widespread acclaim.

“Most African Americans live in this country under fight-or-flight or post-trauma,” Thompson said. “So for us to get any sort of ease, or a spark, is golden. It doesn’t happen that often. I often wonder [whether] a film of this magnitude… could have sparked inspiration for a whole generation of [Black] people. Fifty years out, it [could] still serve [that] purpose.”

Thompson — a musician, journalist, actor and filmmaker who is perhaps best known as joint frontman of the hip hop band the Roots and the musical director of “The Tonight Show” — spoke at Brown University on Saturday, Nov. 12, to a large audience of University and Providence community members who had gathered to hear behind-the-scenes details about “Summer of Soul,” which Thompson directed. Patel, the film’s producer, joined Thompson on stage. Tricia Rose, director of Brown’s Center for the Study of Race and Ethnicity in America, moderated the conversation.

The event was held at the Watson Institute for International and Public Affairs and was part of its John F. Kennedy Jr. Initiative for Documentary Film and Social Progress. Begun in 2021, the series underscores the important role  documentaries play in understanding and confronting challenging social issues. Earlier in the day, Thompson had also taken part in an intimate discussion with Brown students at the Watson Institute.