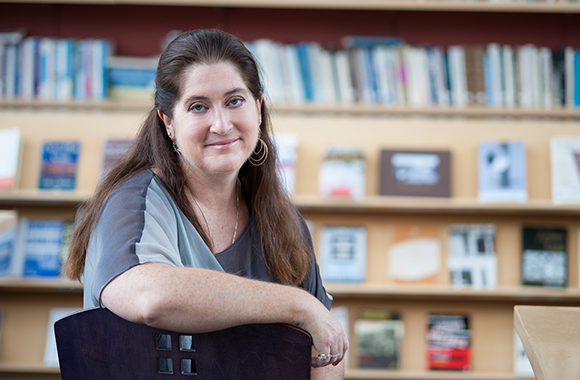 On October 15, the Watson Institute hosted a book panel on The Evils of Polygyny, Evidence of Its Harm to Women, Men and Society, by Rose McDermott, the David and Marianna Fisher University Professor of International Relations. We talked with McDermott, the author of five books and more than 200 academic articles, about this book and current events, including the #MeToo movement.

You researched and wrote your latest book, The Evils of Polygyny, over a period of 17 years. What inspired it?

This entire project began with a conversation I had after 9/11 with Richard Wrangham, the Ruth B. Moore Professor of Biological Anthropology at Harvard University, about foreign policy and violence around the world. Richard, a world-renowned professor, hypothesized that much of this violence stems from men’s control over women’s reproduction, and assumed that data must exist to support his theory. With no such data available, I joined WomanStats (a nonprofit organization that researches and disseminates data that exposes the true status of women everywhere in the world) to research data on polygyny and related violence.

The definition of polygamy includes polyandry, the extremely rare and generally peaceful situations of women taking multiple husbands, and the vastly more frequent situations of polygyny, men taking multiple wives. Polygyny, which represents 97 percent of the cases of the polygamy, often inflicts violence upon children, women, men, and the larger institutions of society.

Most of my books come from other people’s ideas; in this case, I am indebted to Wrangham’s co-authored book, Demonic Males, as well as Bare Branches: The Security Implications of Asia's Surplus Male Population, an important book co-authored by Valerie Hudson, professor and George H.W. Bush Chair in the Department of International Affairs of the Bush School of Government and Public Service at Texas A&M University, where she directs the Program on Women, Peace, and Security.

Can you describe how polygyny is so damaging?

Polygyny reveals the deeply ingrained societal structures by which men impose control over women. When wealthy men buy multiple wives, poor and generally younger men are left with no women, which leads to violence. It’s horrifying and breeds resentments and grievances; it’s much easier for terrorist and rebel groups to recruit young men into their ranks – such as in Niger and the South Sudan – by promising them wives. In Utah, adolescent males – ages 12 and 13 – have been abandoned on highways by the FLDS Church (the Fundamentalist Church of Jesus Christ of Latter-Day Saints, one of the nation’s largest fundamentalist Mormon denominations which practices polygyny) to make it possible for senior men to have multiple wives without fear of competition for women from more junior men.

Children born into these unions fare worse in so many ways: The genetic effect of the sexual violence and trauma children born into such marriages impacts the children’s children. Victims of child sexual assault are likelier to die 20 years earlier than those who don’t experience child sexual assault – creating a significant public health impact – and they also experience worse nutritional and educational outcomes. Paternal bonds are fragile at best; many fathers don’t know their children or their children’s names. Osama Bin Laden’s father, for example, fathered more than 50 children with some 20 wives. Lacking autonomy and protection, and with no access to property rights or income, women are trapped.

Who should read – and act on – this book?

While the intended audience is the international legal community, I’d really like young women to read it. It could change the way they think about themselves in the world and how they can construct a different kind of world. I hope that international relations scholars will pay attention to it and structure international relations in terms of fundamental equality rather than in state-centric terms, which aren’t as effective in creating peace and prosperity.

What changes would you mandate, if you had that authority?

Outlaw polygyny; institute paid maternity and family leave policies, as they do in Europe; and truly prosecute perpetrators of domestic violence. If you beat up your wife, you should go to jail; that really matters. People need to feel safe, yet as long as they are financially dependent and the state looks the other way, things won’t change. It’s important to recognize that male dominance hierarchies are a significant universal phenomenon; men spend time together and dominate women and other men. You can’t just eliminate male drives for dominance by fiat, but you can develop institutions and incentives that pull people in one direction or another. Without those pressures, men continue to benefit from controlling women’s reproductive capacity.

Your book was published in the midst of the #MeToo movement and protests opposing the nomination of Judge Brent Kavanaugh to the U.S. Supreme Court. Any thoughts about those phenomena?

I don’t think it’s accidental that the #MeToo movement emerged at a time when the United States elects a president who has bragged repeatedly about engaging in sexual assault and retains his position, yet former Senator Al Franken was removed from power. People on the left (of the political spectrum) get taken down, while men on the right don’t. If you’re on the left, you can’t raise the issue of due process without being considered a traitor; if you’re on the right, you can’t raise the issue of sexual assault and harassment without being considered a traitor. There’s a huge divide, with no space in the middle that’s not been politicized by ideology. Powerful men in left-leaning industries, including entertainment, television, movies, restaurants, etc., who have been credibly charged with sexual discrimination, harassment and/or assault, get taken down, yet on the right, they protect one another from repercussions, as they did for Brent Kavanaugh.

Kavanaugh’s appointment to the Supreme Court has huge implications for women, including the Griswold decision (upholding the rights of married couples to use birth control) and Roe v. Wade (upholding women’s rights to abortion, without parental, medical or spousal consent), for example. For me, seeing Trump mock Christine Ford Blasey was the most frightening aspect: it said that women who have been assaulted and come forward to tell their story, often at great personal risk and financial expense, will be disbelieved. The perpetrators will be rewarded and women will be mocked. Given what happened, I worry that this will silence other women who have been subjected to sexual assault and trauma. Especially vulnerable people, including undocumented immigrants in refugee camps, children in detainment camps and prisoners, are often victims of sexual assaults; we’re seeing increased reporting of sexual assaults in detainment camps where children are separated from their parents.

Your critically significant work is heart-breaking. How do you do it?

I am grateful and blessed that, given where and when I was born, I was not married off at age 12 to a 70-year-old man who would rape me. I feel a moral obligation to disseminate information so people will understand the dire situation for most of the world’s women. Female academics have pushed back against this book; they want to focus on how women can crack the C-suite, which impacts only a very small percentage of women. While that’s important, it leaves behind the suffering that the vast majority of women regularly experience, such as marital rape, lack of access to clean water and wondering if they can deliver a healthy child.

It’s depressing to think about how little progress we’ve made; I hope that changes.

To hear a recent podcast with McDermott: