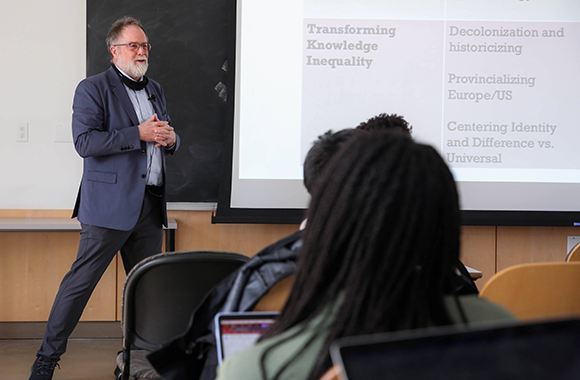 Michael D. Kennedy, professor of sociology and international and public affairs at Brown University, is an expert on East European social movements and system change. A candidate to be vice president of the American Sociological Association, Kennedy teaches a provocative sociology course, Power, Knowledge and Justice in Global Social Change.

This year he focused the course, which is also popular among those with a concentration in International and Public Affairs, on Russia's invasion of Ukraine. He talked with the Watson Institute about how this course shines a light on the Ukrainian situation, now and in the future.

WI: Tell us more about the Power, Knowledge and Justice in Global Social Change course that you first taught in the Spring of 2021.

The course is listed in sociology, but it is also a gateway course for International and Public Affairs (IAPA) concentration. We engage all the knowledge cultures associated with the IAPA concentration – security/international relations, development, and policy, treating them as knowledge cultures with their own orienting questions, normative grounds, empirical references, and privileged contexts and networks. As the course title implies, however, power and justice are the leading concepts of the course, asking how they are articulated in each of these knowledge cultures as well as others.

With such a survey course, we can't expect everyone to become an expert in all the substantive areas we address – from militarism to climate disaster – but everyone has extended their reflexivity. Indeed, that has been the biggest takeaway from the course, if my students' reflections are any indication. Not only have they deepened their own awareness of how their positionality shapes their worldviews, but also how knowledge networks, institutions, and policies reflect the social conditions in which they have been developed. Decolonizing knowledge is, then, a key concern of the course.

WI: It’s no surprise that you chose to focus on Ukraine, given the timing of the Russian invasion.  What stands out for you, and what do you hope the students take from this year’s course?

I have been working in Central and Eastern Europe for my entire career, and I am always prepared to introduce it to my class. As invasion loomed, I decided to make Ukraine a recurring focus for the class.  Before the invasion itself, I asked my class how many were interested in Ukraine's fate in the world. Nobody raised their hand. And while I have emphasized Ukraine across the term more than any of them would have likely preferred, I decided to begin each class with reflections on what we ought to learn from the preceding days. I have assembled those slides, and other comments I have made over the last few months, into a publicly available document that might help to shape public discussions as well as chronicle how the English-speaking world has come to understand this war.

When students look back on this term, I hope they will think about how we struggled to learn together what this war means, and how we came to make sense of it together. In fact, it teaches them several things important to the core message of this course:  What enables any particular context to become central to global discourse?  How do various world regions view any particular context and its contests variably? How do power relations shape those views?

I was particularly fond of pointing out how many would prefer to talk about US/Russian relations while ignoring the struggle for Ukrainian sovereignty and survival, much as representatives of empires preferred to focus on their relations rather than the prospects for emancipations from enslavement following the Haitian Revolution.

WI: What does the Ukrainian situation represent on the global stage?

Of course the Ukrainian struggle against Russian invasion raises more questions than how sovereignty is recognized when empires attack. The first dilemma I marked, also in public discussions, was whether we ought to be fearing escalation of conflict, or whether we ought, as Ukrainians argued, to emphasize that we were already in the midst of World War III, and that Putin's Russia had already lost the cultural political war after the first two weeks. Now we will see whether Russia will lose the military contest, which is, itself, quite possible.

The question of solidarity's making and extensions is a longstanding interest for me, beginning with the study of the Polish Solidarity movement of 1980-81 in my first book, Professionals, Power and Solidarity in Poland: a Critical Sociology of Soviet-type Society (Cambridge University Press, 1991) Nobody could have expected, least of all Putin, that this invasion would not only have led to such solidarity, and courage, within Ukraine, solidarity with the war's refugees across Europe and the world, but also solidarity amongst world powers, apart from, as notorious exceptions, China, Israel and India.  Of course the endurance of that sense of relative global solidarity will be a question we must face in the months to come.