Icebergs, Ultrathins, and the Real Estate State: How Finance Capitalism is Remaking Cities 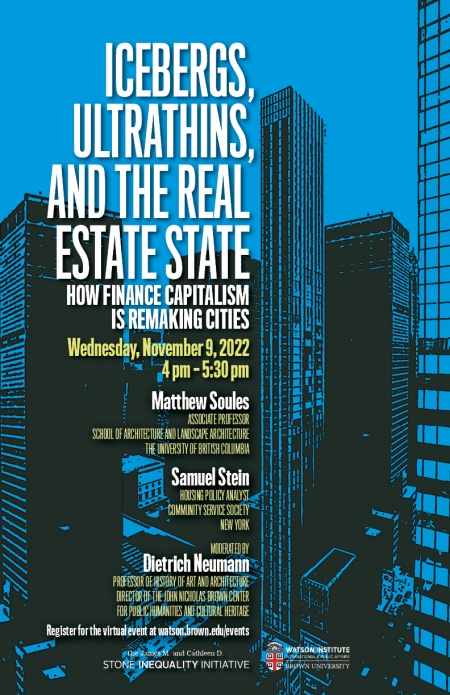 Great wealth is reshaping the cities we live in. Geographer Samuel Stein and architect Matthew Soules explore the accelerating use of architecture as an investment tool and how this heightens and contributes to both inequality and financial instability. From towering ultra-thin "pencil" towers in New York City to cavernous "iceberg" mansions in London, finance capitalism changes not only architectural forms but the very nature of cities. This explosive transformation is driven not only by the taste of the super-rich but by state-led urban planning. The state and finance capital work together to create rising real estate values, rising rents, and a changing urban population.

Moderated by Dietrich Neumann, Professor of History of Art and Architecture, and Director of the John Nicholas Brown Center for Public Humanities and Cultural Heritage.

Matthew Soules is an architect and urbanist who teaches design studios and history/theory seminars. He is a licensed architect and the director of Matthew Soules Architecture. In addition to teaching at UBC he has been Visiting Associate Professor at Harvard University’s Graduate School of Design and Visiting Faculty at SCI-Arc in Los Angeles.  Matthew’s current research focuses on contemporary capitalism and architecture. His book, Icebergs, Zombies, and the Ultra Thin: Architecture and Capitalism in the Twenty-First Century (Princeton Architectural Press, 2021), examines the rise of finance capitalism and its effect on architecture. From the cav­ernous underground “iceberg” homes of the superrich in London to Paris’s owned-but-empty “zombie” housing to the ultra-thin luxury “pencil towers” sprouting in Manhattan, the book demonstrates how investment imperatives shape what and how we build on a global scale. He is also the author of Binning House (ORO, 2017) and has contributed chapters to books such as Industries of Architecture (Routledge, 2015) and Post-War Middle-Class Housing (Peter Lang, 2015). His writing has also appeared in Log, Harvard Design Magazine, Real Review, Praxis, the Journal of Architectural Education, Azure, Canadian Architect, Topos, and 306090.  Matthew has received research funding from the Social Sciences and Humanities Research Council, the Canada Council for the Arts, and the British Columbia Arts Council. He received the AIA/ACSA Housing Design Education Award in 2012 and a Faculty Design Award – Honourable Mention from the ASCA in 2015.  Matthew Soules Architecture has received numerous awards including the Architectural Institute of British Columbia’s Emerging Firm and Special Jury Awards in 2010 and 2015 respectively, an Architizer A+ Award in the Cultural Pavilions Category in 2015, and a selection by Twenty + Change in 2011. The firm’s work has appeared in a range of popular and professional media including Azure, Canadian Architect, Domus, eVolo, Metropolis, the Globe and Mail, and the National Post.

Samuel Stein is a housing policy analyst at the Community Service Society. Prior to joining CSS, he worked for such housing and labor organizations as Tenants & Neighbors and the Service Employees International Union local 32BJ. He holds a Ph.D. in geography from the CUNY Graduate Center and a Master’s in Urban Planning from Hunter College.