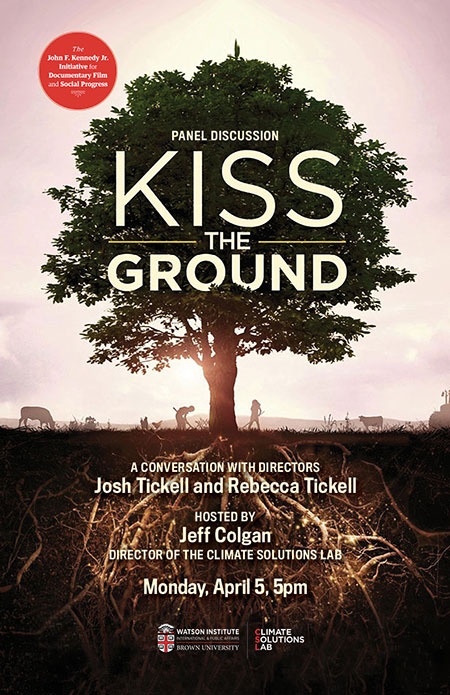 Brown students are invited to submit questions for the panelists here.

Jeff Colgan, director of the Climate Solutions Lab and Richard Holbrooke Associate Professor of Political Science and International and Public Affairs hosts a discussion with Kiss the Ground directors and producers, Josh Tickell and Rebecca Tickell.

Watch the film before the panel on Netflix, or register here for a virtual screening on Monday, April 5 at 3 p.m.

Narrated and featuring Woody Harrelson, Kiss the Ground is an inspiring and groundbreaking film that reveals the first viable solution to our climate crisis.

Kiss the Ground reveals that, by regenerating the world’s soils, we can completely and rapidly stabilize Earth’s climate, restore lost ecosystems and create abundant food supplies. Using compelling graphics and visuals, along with striking NASA and NOAA footage, the film artfully illustrates how, by drawing down atmospheric carbon, soil is the missing piece of the climate puzzle.

This movie is positioned to catalyze a movement to accomplish the impossible – to solve humanity’s greatest challenge, to balance the climate and secure our species future.

The author of four books, Josh Tickell has worked on environmental issues for over twenty years. His career spans a unique mixture of science, journalism and filmmaking. His directorial debut film, FUEL, is the 2008 Sundance Audience Award winning documentary that investigates the possible replacement of fossil fuels with renewable energy. His 2017 Simon and Schuster book, Kiss the Ground, How the Food You Eat Can Reverse Climate Change, Heal Your Body and Ultimately Save Our World, was an Amazon Bestseller in multiple categories. Tickell holds an MFA in film from Florida State University’s Film School. He is a regular guest on talk shows and gives keynote presentations internationally on sustainability, regeneration and filmmaking.

Rebecca Tickell is a director, producer and environmental author & activist. She produced the Sundance Audience Award Winning, environmentally-themed movie, FUEL, and co-directed/produced ‘The Big Fix’, an ‘Official Selection’ of the 2011 Cannes Film Festival. She spent several years documenting the impacts and root cause of the BP oil spill. While investigating the spill she became ill and was left with permanent damage from exposure to the oil and dispersant in the atmosphere. Her directorial debut (with husband Josh) was the critically acclaimed documentary PUMP, narrated by Jason Bateman. She directed and produced the John Paul DeJoria story, GOOD FORTUNE, the YouTube sensation, THE EARTHING MOVIE as well as the forthcoming documentary THE REVOLUTION GENERATION and the forthcoming feature scripted film, HEARTLAND. As a child, she starred in the Orion (now MGM)’s Christmas Classic movie, Prancer.