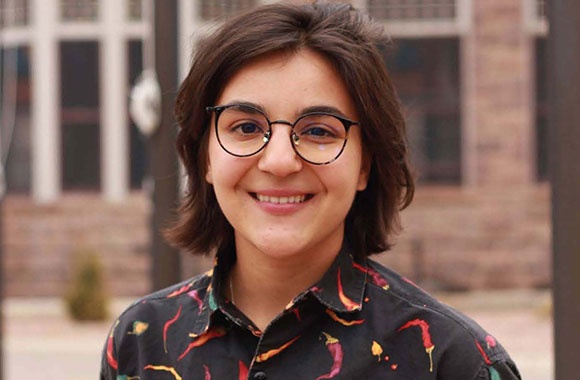 As a research assistant, you helped Professor Geri Augusto prepare for DEVL 1874: Development's Visual Imaginaries: Still and Moving Images That Shaped the Field, a new course being offered this semester. What did your research entail?

What Professor Augusto asked me to do was to try to find relevant primary images that would illustrate different themes that the class would be exploring. For example, one of the main themes being explored in the class is slavery, and so I was asked to find original runaway ads. I also found postcards from people who were advocating against slavery that were sent all around the country. Overall, my role has been to dig both in Brown’s resources — mainly the John Hay Library — and different online resources to find primary images that could be referenced in the class. As the class begins, I will continue to work with Professor Augusto on refining the course as time goes on, such as finding supplementary primary documents.

Why do you think students should be interested in this material, and engage with it first hand in the Hay?

I think working with primary sources in this way is really interesting because it allows students to understand these concepts of development from the mindset of the people involved in these concepts. Also, because it pushes students to explore the great resources that Brown has. Doing the work as a research assistant, made me realize the extent of some of Brown’s connection — and I think that more students should pursue that type of work because it is really interesting.

For example, I was really impressed by the Hay’s collection, specifically regarding the themes of manifest destiny and the depiction of Native Americans in early American history. As I noted earlier, I had access to postcard collections. One postcard included a picture of enslaved children, and was shared around the U.S. by people who were advocating for the abolition of slavery. That picture, and the whole set of postcards, featured children who were white-passing. I felt that the chosen imagery was interesting because it made me reflect on the fact that even people who were for the abolition of slavery were very influenced by racism, which made them feature white-passing children. The reason behind that was that the people receiving these postcards would then see their own children in the image, making them more compassionate toward the situation — which of course illustrates structural racism. While I had already thought about some of these ideas before being a research assistant for this course, seeing the primary documents and visuals was impactful.

How has this research related to, built on your studies at Brown?

I am a first-year student so I am not certain yet on what I will be studying while here at Brown. But, I am thinking of pursuing the new International and Public Affairs concentration, and specifically following the Development track. I think this work as a research assistant made me decide to follow the Development track, because I found it really interesting to reflect on these ideas of development, and even question these principles. One of my interests within this field is women’s rights, and it was interesting to see how women were depicted in these primary documents.