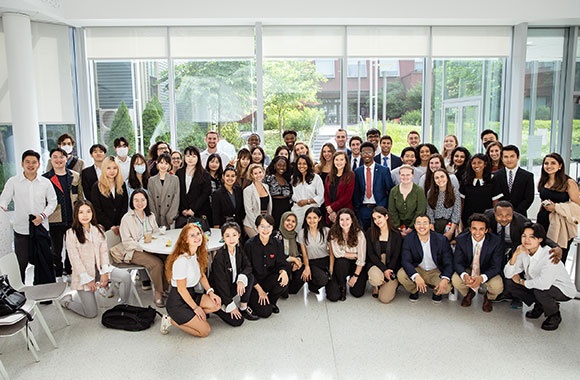 Together Again: The MPA Class of 2023 Has Arrived

Watson’s Master of Public Affairs program recently welcomed the members of its newest class in person for the first time since 2019. In addition to being 60 percent female, the Class of 2023, some 60 students strong, is remarkably diverse, with almost half hailing from 12 countries beyond the United States – Afghanistan, China, France, Germany, Hong Kong, India, Iran, Kenya, Pakistan, Singapore, Sri Lanka, and Zimbabwe. More than 40 percent of U.S. MPA students identify as part of historically underrepresented groups, and the class includes three MPA/MPH candidates.

The fully packed Orientation Week began on Monday, June 6, with a welcome breakfast and conversation with Susan Moffitt, the program’s director, and Edward Steinfeld, director of the Watson Institute. What followed were five days of intense, nonstop learning and bonding.

Students toured the campus, met with summer faculty and members of Brown’s Department of Public Safety, heard from a panel of Brown graduate student support staff, and got acquainted with library and Writing Center resources. They also explored the nuts and bolts of the program and learned about career planning through a training led by Associate Director of Professional Development and Alumni Relations Ben Chalot. In addition, they attended a lecture by Jonathan Collins, assistant professor of education, political science, and international and public affairs, who discussed how his research on civic engagement intersects with public policy.

In terms of community building, students enjoyed an ice breaker, a game of human bingo, a Myers Briggs workshop, and numerous receptions and meals both on campus and in Providence.

Shaun Whitaker, who majored in political studies at Pitzer College and wants to use her MPA to advance gender equity through positive policy changes, says she appreciates how deeply invested in the new cohort everyone is, from staff to faculty to the students themselves.

“I was blown away by how seamless every piece of orientation has been as a result of the thoughtfulness of the MPA team,” she says.

According to Starrchild Jackson, who majored in American studies and finance and is planning on a career in public service, the best part of Orientation Week was “getting to know my cohort. Everyone has had a very genuine and authentic energy around them.”

David Benoit, who recently served as the deputy director of legislative affairs and community engagement for the City of Providence, hopes to focus on issues of peace and immigration policy as  it relates to ethnic conflict throughout the Global North and South. For him, “what stuck out during Orientation was the immense resources tailored specifically to graduates’ success,” he says. “It's incredible to see such an emphasis on holistic wellness for students.”

"I was immediately impressed with this cohort's energy and engagement,” says Moffitt. “They will be outstanding partners in Watson's pursuit of a more just and peaceful world.”