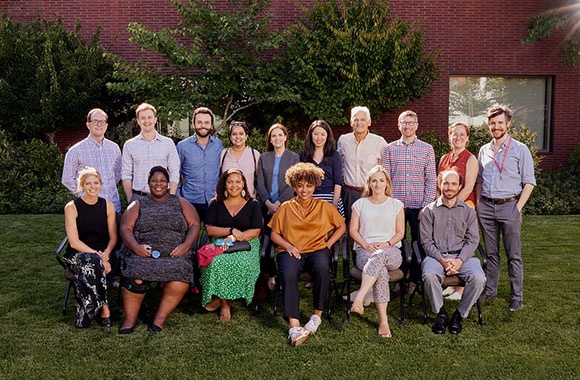 “The Watson Institute is an extraordinarily welcoming and egalitarian community,” said Saul Wilson, a postdoctoral fellow. At this year’s opening meeting, he was pleasantly surprised when everyone – from newly hired administrative staff to the most senior faculty members – was introduced to the community. “It sets the tone and it’s one of Watson’s best aspects,” he said.

The highly competitive selection process for Watson’s two-year Postdoctoral Fellows program generally accepts only four or five applicants from some 500 applications, selecting diverse candidates from across the social sciences. One or two others come through other parts of the University. The expertise of this year’s fellows ranges from health policy, foreign policy decision-making during crises, and microeconomics to refugee resettlements, political violence and transitional justice, and China’s rapid urbanization policies.

That interdisciplinary approach appealed to Wilson, a political scientist who studies the politics of urban development and land property rights during China's rapid urbanization. “It creates a much more diverse intellectual environment for us; it’s an asset to have people working in other areas, such as history and anthropology. We get exposed to more and different methodological approaches,” said Wilson. He also appreciates engaging with Watson Director Edward Steinfeld, and faculty associated with the Saxena Center for Contemporary South Asia, as Wilson will be teaching next year at Ashoka University in India. “It’s a good intellectual fit.”

Postdoctoral fellow Genevieve Bates, a political scientist, concurred. “Graduate school can silo people into their discipline … and limit people’s thinking and creativity. I’ve always found interdisciplinary research to be very appealing and fosters more interesting ideas. For me, Watson is the perfect place to pursue my work.”

Calling this year’s cohort of nine postdoctoral fellows “an extremely exciting group,” Interim Director of the Postdoctoral Fellows Program for 2022-2023, J. Nicholas Ziegler said, “There are fellows who present at the Economics Department’s Seminar on Applied Micro and others working with the School of Public Health and the Center for the Study of Race and Ethnicity in America.”

The program’s first cohort arrived in 2014 at Watson, which was eager to “support scholarship among a group of very exciting young scholars who had just finished their PhDs and would continue working on cutting-edge topics,” recalled Ziegler. “Our postdoctoral program is slightly different from other comparable programs because it is dedicated to bringing social science research expertise to bear on real world policy problems.”

Wilson’s Comparative Politics of Urban Development, a junior seminar offered this spring, will examine how different countries – notably the United States and China, with a lesser focus on India and Brazil – have organized urban development and how the resulting policies differ. Organized nearly exclusively around weekly readings, the seminar will engage students to evaluate the similarities and differences in urban development in each of these countries.

While at Watson, Wilson is focusing on turning his dissertation into a book, whose working title is The Landlord State, which focuses on China’s role as a landlord state.

Students enrolled in Bates’ junior seminar, Transitional Justice, will evaluate that concept through a global comparative lens. “That concept,” said Bates, “evolved in the late ‘80s and ‘90s as many authoritarian nations in Europe and Latin America were transitioning to democracies. The practice and study of transitional justice evolved from the big question: ‘What do we do with all these terrible people who perpetrated horrific acts under authoritarianism?’” said Bates. In studying the post-World War II Nuremberg trials and the tribunal after the Rwandan genocide, students will evaluate the tools that nations have used – such as reparations – to address abuses that arise during periods of civil wars or other political violence.

Bates’ revisions of her dissertation, Holding Their Feet to the Fire: Negotiated Accountability in the Shadow of the International Community, for book publication is “very much a work in process.” She and a colleague are working on a different project that focuses on contextualizing racial justice in the United States through a broader human rights perspective. Bates and her colleague found that respondents to their survey who identified as Democrats and independents were more supportive of policies related to “defunding the police,” when they were framed as an international human rights issue.

Both Wilson and Bates enjoyed presenting their work to colleagues during the program’s Work-in-Progress sessions, where fellows present their research and solicit comments from those attending. “It’s a real treat to get thoughtful and engaged feedback from a diverse group of colleagues, whose perspectives are different from mine,” said Wilson.

Fellows present their research at these sessions which meet every two weeks, said Ziegler, who described the discussions as “constructive and extremely helpful.” Watson also hosts some number of “professionalization sessions,” where fellows get guidance on turning a dissertation into a book and meet acquisition editors and former postdoctoral fellows from earlier cohorts. These sessions, said Ziegler, give the postdoctoral fellows a sense of how to move from this position into a faculty position.

Four of this year’s nine postdoctoral fellows already have strong academic appointments lined up, said Ziegler. “It’s a sign of how extraordinary a group it is.”