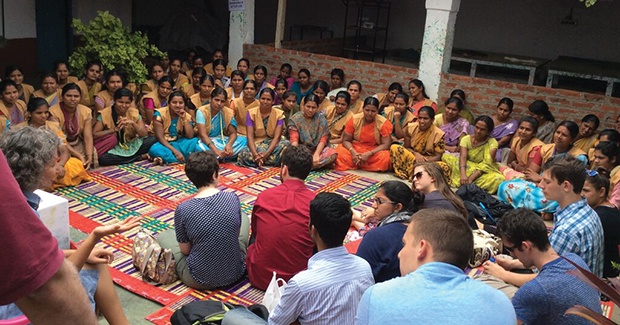 The Watson Institute has launched a two-week “global policy experience” as a required part of its one-year Master of Public Affairs program The MPA class of 2016 traveled to either Sweden, Brazil, or India to learn how policy makers in other countries implement solutions within local institutional, social, and political constraints.

“The global policy experience is one of the signature elements of our new MPA program,” said Shankar Prasad, assistant director of the Brown public policy program. Prasad described the GPE as a unique opportunity use analytical skills gained during the summer term to meet with scholars, academics, and researchers to gain perspective on how local politics and institutions influence the policy-making process in different countries.

"Sweden gave me a fresh perspective into issues of healthcare and criminal justice that complements what I'm studying in the US. A comparative look between the two countries sharpened my insight into how to think about criminal justice policy in the US," said one student.

The Swedish GPE team attended the Stockholm School of Economics, where they studied the Swedish welfare state and its sociopolitical context, focusing especially on issues of health and criminal justice. As well as visiting the Swedish Parliament and speaking with a local MP, the students visited institutions of the welfare state, including a maternity clinic, regulation-issuing institutions, a Stockholm-based think-tank, and an early childhood education center.

Sweden’s long-established welfare state provides a case study on the mechanics of a social democracy that uses evidence-based approach to policymaking. The state prioritizes institutions dedicated to making each individual maximize their potential. Students also explored the limits and failures of this approach in Sweden’s immigrant, refugee, and racial minoriy populations.

The India GPE team, based in Bangalore at the Azim Premji University, studied the constitutional foundations of India’s democracy, land and infrastructure governance, economic policy, and the welfare system. The team met with Krishna Byre Gowda, minister of agriculture for the state of Karnataka, as well as leaders of non-state actors like a microfinance institute and a local NGO.

Identifying India as at a crucial state in its development, the group noted that it currently resembled the US during the Gilded Age — without the industrial boom. Studying India’s “unique political paradigm,” including the Great Transformation, the introduction of democracy before the industrial revolution and the unusual advent of rural blocs voting more than elites, the team emphasized how all these institutions constrain and shape policy making, especially as policymakers try to navigate tensions between different caste and religious groups.

The Brazil team studied at the Fundação Dom Cabral Aloysio Faria Campus in Nova Lima, where they discussed issues of income inequality, public safety, public health, and the environment. Students visited Brazil’s Supreme Court, where Minister of Justice invited them to attend a session. Other stops included the National Congress, and the Ministries of Foreign Affairs, Strategic Affairs, and Environment. The group was based in Belo Horizonte, but traveled to Brasilia to make their ministerial visits.

Focusing on crime, income inequality, and a dire water crisis, the team turned towards potential solutions for Brazil. In studying the poverty-alleviation conditional cash transfer program Bolsa Familia and the community-outreach and crime-prevention program Fica Vivo, the team found that the Brazilian government has the ability to implement highly efficient, successful programs. Turning to the country’s water crisis, students made policy recommendations including pricing incentives for water conservation and investments in water infrastructure.