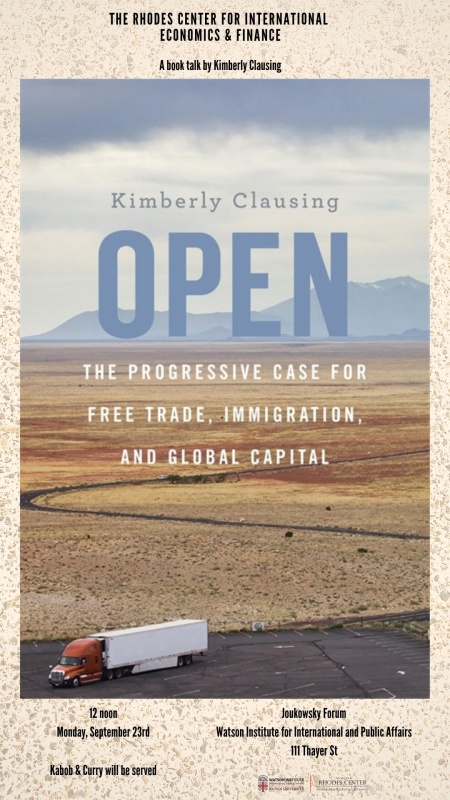 Professor Kimberly Clausing will join us to discuss her book Open: The Progressive Case for Free Trade, Immigration and Global Capital

With the winds of trade war blowing as they have not done in decades, and Left and Right flirting with protectionism, a leading economist forcefully shows how a free and open economy is still the best way to advance the interests of working Americans.  Globalization has a bad name. Critics on the Left have long attacked it for exploiting the poor and undermining labor. Today, the Right challenges globalization for tilting the field against advanced economies. Kimberly Clausing faces down the critics from both sides, demonstrating in this vivid and compelling account that open economies are a force for good, not least in helping the most vulnerable.

A leading authority on corporate taxation and an advocate of a more equal economy, Clausing agrees that Americans, especially those with middle and lower incomes, face stark economic challenges. But these problems do not require us to retreat from the global economy. On the contrary, she shows, an open economy overwhelmingly helps. International trade makes countries richer, raises living standards, benefits consumers, and brings nations together. Global capital mobility helps both borrowers and lenders. International business improves efficiency and fosters innovation. And immigration remains one of America’s greatest strengths, as newcomers play an essential role in economic growth, innovation, and entrepreneurship. Closing the door to the benefits of an open economy would cause untold damage. Instead, Clausing outlines a progressive agenda to manage globalization more effectively, presenting strategies to equip workers for a modern economy, improve tax policy, and establish a better partnership between labor and the business community.

Kimberly Clausing is the Thormund Miller and Walter Mintz Professor of Economics at Reed College, where she teaches international trade, international finance, and public finance. Her research studies the taxation of multinational firms. She has published numerous articles in this area, and she is the author of Open: The Progressive Case for Free Trade, Immigration, and Global Capital (Harvard University Press, 2019). Professor Clausing has received two Fulbright Research awards (to Belgium and Cyprus), and her research has been supported by external grants from the National Science Foundation, the Smith Richardson Foundation, the International Centre for Tax and Development, the U.S. Bureau of Economic Analysis, and the Washington Center for Equitable Growth. She has worked on economic policy research with the International Monetary Fund, the Hamilton Project, the Brookings Institution, and the Tax Policy Center, and she has testified before both the House Ways and Means Committee and the Senate Committee on Finance. Professor Clausing received her B.A. from Carleton College in 1991 and her Ph.D. from Harvard University in 1996.