Michael Zakim – Accounting for Capitalism. The World the Clerk Made 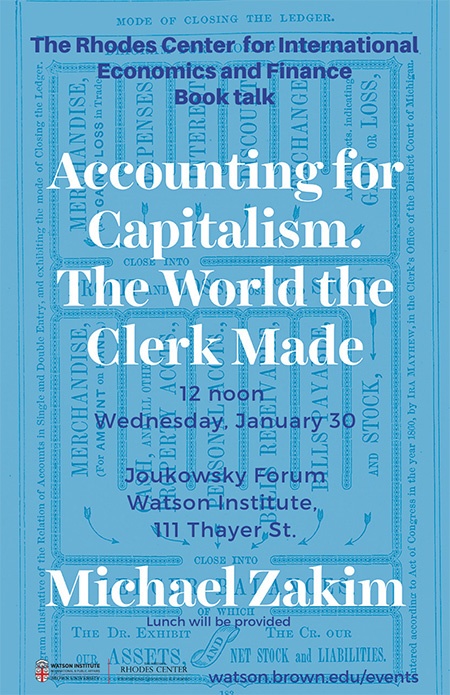 Michael Zakim, History Professor at Tel Aviv University, will join us to discuss his new book Accounting for Capitalism.

The clerk attended his desk and counter at the intersection of two great themes of modern historical experience: the development of a market economy and of a society governed from below. Who better illustrates the daily practice and production of this modernity than someone of no particular account assigned with overseeing all the new buying and selling? In Accounting for Capitalism, Michael Zakim has written their story, a social history of capital that seeks to explain how the “bottom line” became a synonym for truth in an age shorn of absolutes, grafted onto our very sense of reason and trust.

This is a big story, told through an ostensibly marginal event: the birth of a class of “merchant clerks” in the United States in the middle of the nineteenth century. The personal trajectory of these young men from farm to metropolis, homestead to boarding house, and, most significantly, from growing things to selling them exemplified the enormous social effort required to domesticate the profit motive and turn it into the practical foundation of civic life. As Zakim reveals in his highly original study, there was nothing natural or preordained about the stunning ascendance of this capitalism and its radical transformation of the relationship between “Man and Mammon.”