Zsófia Barta – In The Red: The Politics of Public Debt Accumulation in Developed Countries 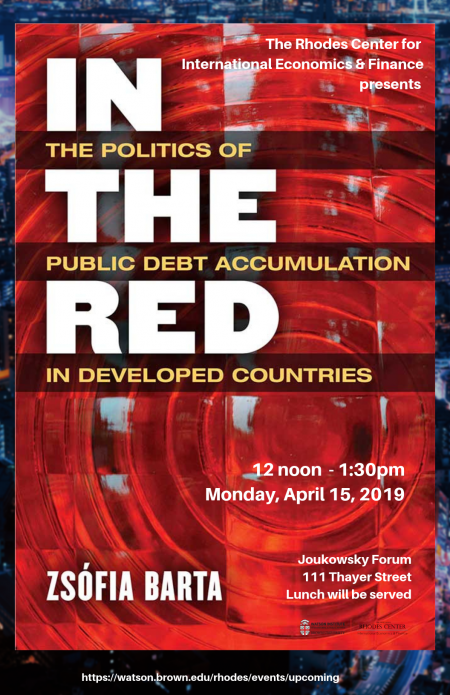 Zsófia Barta, will join us to discuss her new book In The Red: The Politics of Public Debt Accumulation in Developed Countries.

Why do rich countries flirt with fiscal disaster? Between the 1970s and the 2000s, during times of peace and prosperity, affluent countries—like Belgium, Greece, Italy, and Japan—accumulated so much debt that they became vulnerable and exposed themselves to the risk of default. In the past three decades, an extensive scholarly consensus emerged that these problems were created by fiscal indiscipline, the lack of sufficient concern for budgetary constraints from policy makers as they try to please voters. This approach formed the foundation for the fiscal surveillance system that attempted to bring borrowing in European countries under control via a set of fiscal rules. In the Red demonstrates that the problem of sustained, large-scale debt accumulation is an adjustment issue rather than a governance failure. Irrespective of whether the original impetus for borrowing arose from exogenous changes or irresponsible decision making, policy makers invariably initiate spending cuts and/or tax increases when debt grows at an alarming rate for several years in a row. Zsófia Barta argues that explaining why some countries accumulate substantial amounts of debt for decades hinges on understanding the conditions required to allow policy makers to successfully put into place painful adjustment measures.

Zsófia Barta joined the faculty of Rockefeller College at the University at Albany in fall 2013. Dr. Barta's research and teaching interests are in the areas of comparative politics, political economy and public policy, with particular focus paid to the societal origins of policy variation within political economy. Her main research area is the politics of public debt accumulation, covering diverse aspects of public finances from societal conflicts surrounding austerity to the influence of market actors — primarily rating agencies — on fiscal policies. Her book, 'In The Red: The Politics of Public Debt Accumulation in Developed Countries' (forthcoming at University of Michigan Press) explores the variations in countries' ability to control their debt. At Rockefeller College, Dr. Barta teaches undergraduate and graduate courses in comparative public policy, public finances and the welfare state. She comes to the University at Albany after completing her PhD in European Political Economy at the London School of Economics and Political Science. Dr. Barta held a Max Weber Postdoctoral Fellowship at the European University Institute in Florence.