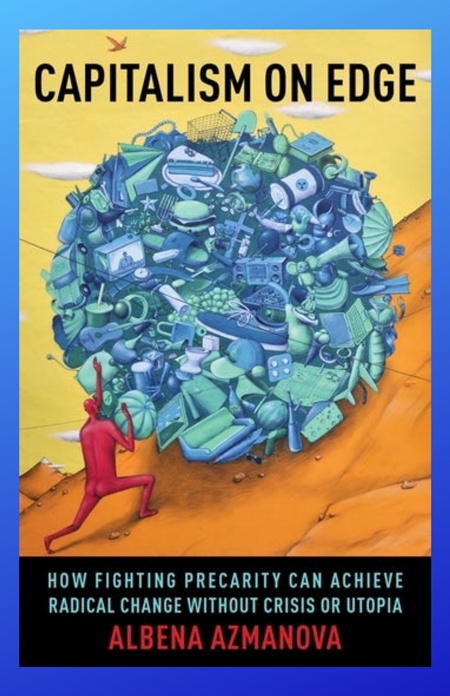 Albena Azmanova will join the Rhodes Center to discuss her new book, "Capitalism on Edge: How Fighting Precarity can Achieve Radical Change Without Crisis or Utopia."

The wake of the financial crisis has inspired hopes for dramatic change and stirred visions of capitalism’s terminal collapse. Yet capitalism is not on its deathbed, utopia is not in our future, and revolution is not in the cards. In "Capitalism on Edge", Albena Azmanova demonstrates that radical progressive change is still attainable, but it must come from an unexpected direction.

Azmanova’s new critique of capitalism focuses on the competitive pursuit of profit rather than on forms of ownership and patterns of wealth distribution. She contends that neoliberal capitalism has mutated into a new form—precarity capitalism—marked by the emergence of a precarious multitude. Widespread economic insecurity ails the 99 percent across differences in income, education, and professional occupation; it is the underlying cause of such diverse hardships as work-related stress and chronic unemployment. In response, Azmanova calls for forging a broad alliance of strange bedfellows whose discontent would challenge not only capitalism’s unfair outcomes but also the drive for profit at its core. To achieve this synthesis, progressive forces need to go beyond the old ideological certitudes of, on the left, fighting inequality and, on the right, increasing competition. Azmanova details reforms that would enable a dramatic transformation of the current system without a revolutionary break. An iconoclastic critique of left orthodoxy, "Capitalism on Edge" confronts the intellectual and political impasses of our time to discern a new path of emancipation.

Albena Azmanova teaches political and social theory at the University of Kent’s Brussels School of International Studies. She is author of "The Scandal of Reason: A Critical Theory of Political Judgment" (Columbia, 2012) and coeditor of "Reclaiming Democracy: Judgment, Responsibility, and the Right to Politics" (2015). She has also been a policy adviser to the United Nations, the Council of Europe, the European Parliament, the European Commission, and Transparency International.