Patrick Le Galès — The Financialization of Housing in Paris and London 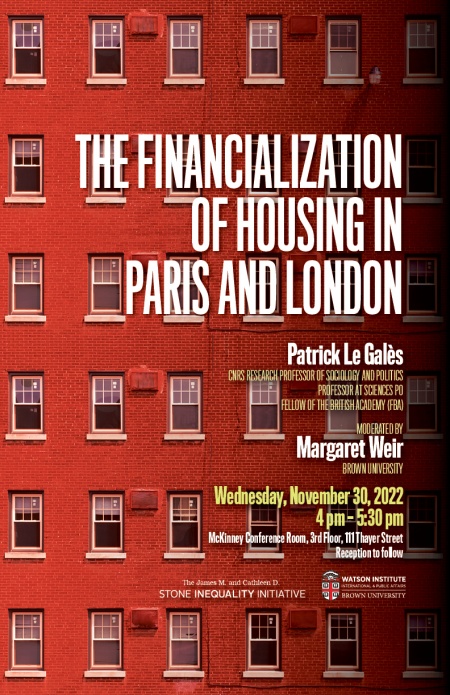 Patrick Le Galès, FBA, MAE, is CNRS (National Scientific Research Centre) Research Professor of Sociology, Politics and urban studies at Sciences Po, Centre for European Studies and Comparative Politics. He was the founding Dean of Sciences Po Urban School (2015-2022) where he still teaches, and is involved in the “ Cities are back in town ” and “restructuring the state” research groups. He is a co-editor of the European Journal of Sociology/Archives européennes de sociologie Prior to this he was the editor of the International Journal of Urban and regional Research. In the autum 2022 he is a visiting scholar at the Institute of Public Knowledge at New York University.

He is currently working on a project comparing modes of governance ( What is governed and not governed? ) and urban development in Paris, London, Sao Paolo, Mexico. He has just completed a comparative research project on financialization and housing in Paris, London and Amsterdam (with M. Raco and T. Tasan Kok) He is currently editing a book on the governance of Paris as organised anarchy with Francesca Artioli. With Philippe Bezes he is developing the concept of the policy state. Recent publications include : Globalising minds, roots in the cities, upper middle classes in Europe? (with A. Andreotti and J. Fuentes Wiley/ Blackwell in 2015), Reconfigurating European States in Crisis (with D.King, OUP, 2017), . Gouverner la métropole parisienne. État, conflits, institutions, réseaux Presses de Sciences Po. 2020 ; Handbook of Comparative Global Urban Studies (with J.Robinson, forthcoming Routledge 2023