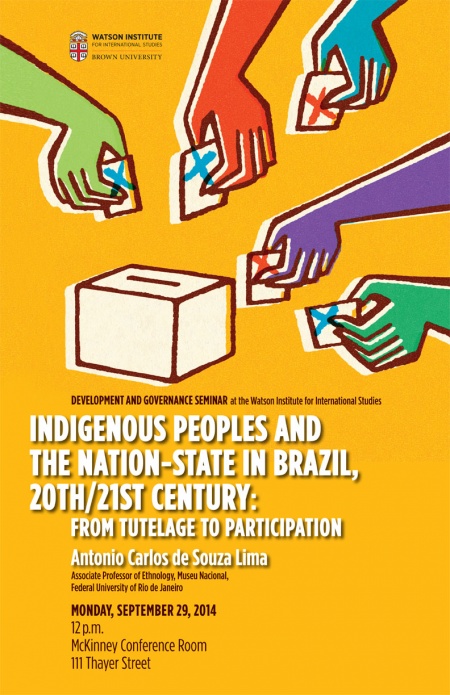 This paper presents an analysis of relations between indigenous peoples and the Nation-State in Brazil from the early twentieth century to the present, examining the standards of governance established by government policies directed at these communities, rights recognition, and ongoing development initiatives. Under tutelage, indigenous peoples were considered relatively incapable for civil life, needing the guardianship of a state agency whose functions implied defining indigeneity and establishing and governing small reservations where indigenous peoples were ideally expected to become Brazilian rural wage laborers.  Under the participation model, indigenous peoples are able to define their indigeneity, act as full citizens, and have their traditional lands delineated according to their uses and customs. However, true basis for participation implies a knowledge of Brazilian and international politics that indigenous peoples are still in the process of acquiring. Through this gap between ideal and actual means to participate, tutelary mediation of churches, universities and NGOs, as well as of public agencies, may be reintroduced in the interethnic scene, bringing to light the contradictions of a colonial history that has yet not been overcome

Dr. Antonio Carlos de Souza Lima is an anthropologist focusing on governance and indigenous populations in Brazil. He holds a B.A. (1979) in history from Universidade Federal Fluminense (UFF) and an MA (1985) and PhD (1992) in anthropology from Museu Nacional, at the Federal University of Rio de Janeiro (UFRJ). He is currently an associate professor of ethnology at Museu Nacional, Federal University of Rio de Janeiro (UFRJ), where teaches and advises in graduate programs in social anthropology and archaeology. His research is sponsored by the National Council of Scientific and Technological Development (CNPq) (since 2009) and the Rio de Janeiro State Research Support Foundation (FAPERJ) (2004-2006; 2007-2009; 2011-2014). His primary experience is in the areas of political anthropology and the history of anthropology in Brazil, working mainly on the following themes: Anthropology of the State (public administration, international technical cooperation, affirmative action on higher education), indigenism, indigenist policies, and historical anthropology. His current project, “From the tutelary state to the participatory state: an anthropological approach” analyzes the social forms through which we can conceptualize, in the Brazilian case, the making of a pluriethnic (or multicultural) state that includes as its central element the recognition of the differentiated rights of indigenous peoples in the participatory formulation of government actions. Dr. Souza Lima is co-coordinator of the Laboratory for Research in Ethnicity, Culture and Development (LACED - http://www.laced.etc.br)/Sector of Ethnology/Department of Anthropology/Museu Nacional/UFRJ – responsible for coordinating the project Trails of Knowledge: indigenous higher education in Brazil (http://www.trilhasdeconhecimentos.etc.br), financed by the Ford Foundation, from 2004 to 2009. He was vice president of the Brazilian Anthropological Association (2002-2004), and has recently been elected its president for the upcoming biennium (2015-2016).